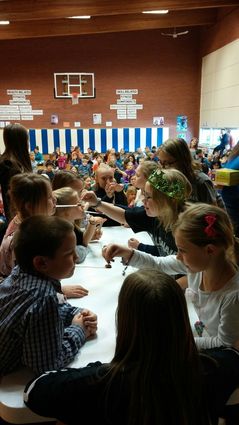 Team Building and Fun. Meadowlark students play a team building game, Minute to Win It, in an assembly last week. The challenge was not only in stacking the pennies without their toppling but ensuring that the partner held steady.

On March 25-26 during parent-teacher conferences, Meadowlark Elementary held a Scholastic Book Fair. Those attending encountered "Pardon the Inconvenience" signs to indicate that the school is under construction. The method previously used for releasing the locked doors to allow visitors to enter is no longer functioning as the elementary school undergoes the process of upgrading to a security system similar to the one at the high school.

In other news from Meadowlark, at an assembly last week, students reviewed the Universal Expectations that are part of the Montana Behavior Initiative...