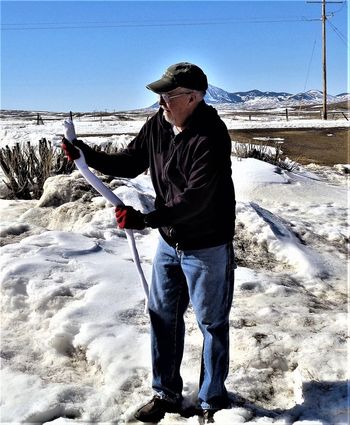 "South of the Border" columnist Steve Edwards displays a snow snake he recently found in the front yard where he lives in Whitlash. While not often seen, the reclusive reptile seems to be most active in early spring when the drifts and snow piles it lives in begin to disappear. This specimen believed by locals to be a 'mature adult' snow snake was just over three feet long. Unless they pose a hazard to a family or livestock, snow snakes should be left alone as they help reduce the number of rodents during the winter months.

Columnist's note: My wife and I moved to Whitlash in mid-December. Despite a mild start to winter, we saw little wildlife except a few sharp-tailed grouse wandering through the yard and occasional deer across the pasture. Then February hit and there was virtually no wildlife to be seen around our yard, basically we were surrounded by snow piles, drifts and blowing snow. I was really curious to see what sorts of wildlife I would see in the Sweet Grass Hills come spring.

In mid March we experienced the first signs of spring. Along with some thawing the sun began to have noticeable heating power and I encountered my first wildlife not familiar to me-a snow snake right out in a snow drift in the front yard. Here's some of what I learned about this reclusive and rare species.

General information about the snow snake

In addition to the natural snow drifts that occurred around the house from the wind, a kind neighbor had pushed snow away from my driveway with his farm tractor so I'd have room to pile more snow as I repeatedly hand shoveled the driveway to our garage. That created a series of piles and drifts that, it turns out, is great habitat for snow snakes. Because they can't regulate their body temperature the snakes must find ways to protect themselves from the cold of winter. Manmade piles of shoveled snow and natural drifts provide a place for the snakes to survive during the harshest part of winter.

I asked some folks who've lived most of their lives in the Sweet Grass Hills about the snow snake. Few had actually ever seen a snow snake but they had heard stories of encounters by the early settlers as well as more recent sightings often near or in the immediate area of houses and outbuildings.

Most locals agreed that early spring, when the sun begins to really warm things up, is the best time to see a snow snake. One old-timer said, "The snow snakes are kind of like people, when the sun begins to warm things up we all want to get out and about." An article I found online by an herpetologist (specialist in the study of reptiles and amphibians) suggested that snow snakes, more common in Canada, might have come south into the U.S. because of the particularly cold winters north of the border during this and recent years. Another expert wrote that the very frigid contditions experienced this winter along the Hi-line east of the Hills could have driven the snakes further west where the weather was a bit more moderate.

I wondered if the snow snake was so rare that perhaps it was listed as an endangered species and, therefore, protected. The U.S. Fish and Wildlife Service's online listing of endangered species for Liberty County, Montana, had no mention of the snow snake. Likewise, COSEWIC, a Canadian advisory council that consults to the Canadian Minister of Environment and Climate Change, had no listing for the snow snake as a species at risk. While rare the species is not legally protected as far as I could determine in either country.

Some suggestions for making life with snow snakes safe and enjoyable

Snow snakes have a role in the environment and do their part to keep things in balance. Have you ever wondered why you see so few rodents in yards and fields during heavy snow cover? Thank the lowly snow snakes who are doing their part to keep the rodents at bay. Experts encourage leaving piles of snow and drifts in place to provide habitat for the snakes protecting hibernation sites like wood and burn piles.

In the spring, lay out a few boards or uncover rocks so the snakes have a place to sun themselves and get ready to move on as winter ends. Unless a snow snake poses a threat to you and your family, the snakes should be left alone. If a snow snake needs to be relocated for safety reasons, check with your local hardware or sporting goods store for a Havahart trap specially designed to capture snow snakes.

From a safety standpoint it's never a good idea to stick your hand into a hole where a snow snake might be lurking. While not believed to be poisonous, a bite from a snow snake could cause some issues from infection or injury. Wear protective clothing, gloves and boots especially, if you will be working around areas where snow snakes might be active. Snowmobiles are believed to be moving fast enough that the reptiles pose little danger to riders.

The future for snow snakes

A spokesperson for the Montana Department of Tourism believes there can be a positive economic gain with the potential growth in the number of snow snakes in our area. Because of the increased demand for "ecotourism vacations and experiences" areas with snow snakes could become destinations for people who want to experience snow snakes in the reptile's natural habitat. Regional outfitters could someday be organizing trips to see snow snakes, a nice winter addition to current hunting and fishing opportunities that tend to occur only in milder weather. Tours to view snow snakes could add to Montana's burgeoning $3.24 billion tourist trade.

And here's one more important point to ponder about snow snakes: Enjoy a happy 2019 April Fools' Day. I hope you don't have too many pranks pulled on you.