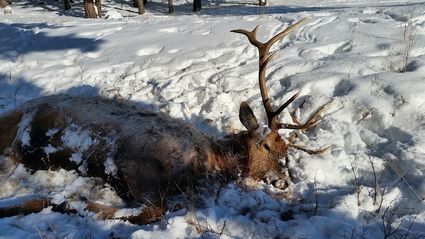 What began with a tip back in February, the Illegal killing of two Bull Elk south of Chinook, has concluded with a judgment against a local defendant.

On February 14, 2019 Region 6 Game Wardens out of Havre received a call from TIP-MONT regarding a dead bull elk approximately two miles north of Cow Creek Reservoir off the Lloyd road in southern Blaine County.

MFWP received information through people coming forward that led to the arrest of Cameron Dow Overcast of Chinook. Overcast was charged with seven counts, including Waste of a Game Animal, Fish or Bird (2 Counts), Hunting or fishing during closed season (2 Counts), Failure to obtain landowner permission for hunting, Unlawful Hunting from a public highway and hunting from a motor vehicle.

Overcast appeared in Blaine County Justice Court on March 7 before Judge Perry Miller and waived his right to counsel. Overcast pleaded guilty to all seven counts and was ordered to appear again in court on April 3 for sentencing.

On the two counts of Waste Of A Game Animal, Overcast was sentenced to 6 months in jail with 90 days suspended on each charge. On Count One Overcast was fined $8,000 after the 7x7 Bull was determined to be a trophy animal. He was fined $1,000 on count two, a 6x6 bull Elk.

Jail time and fines in counts 1-4 and count 6 shall run consecutive for a period of 2.5 years. Jail time in Count 7 shall run concurrent with the other sentence. Overcast was also ordered to reimburse Blaine County (Pursuant to M.C.A 87-6-916) $50 for each day of his incarceration.

All Items seized by Montana Fish, Wildlife and Parks in the matter shall be forfeited and the defendants privilege to hunt, fish and trap shall be suspended for a period of 25 years.

Overcast was also ordered to obtain a chemical dependency and mental health evaluation at his own expense and follow all recommendations of the counselors, including inpatient treatment. He must also submit himself to random testing of his breath or bodily fluids by law enforcement or the court, upon belief he has consumed alcohol or illegal drugs. Submitting a positive test or refusal to submit to testing shall be considered a violation of his sentencing order.