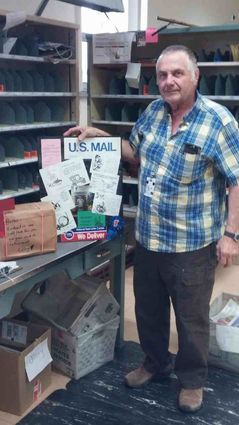 After twenty years of service, Brian Baker retired from the United States Postal Service on April 5. Here, he poses with a collection of cards from his colleagues, as well as a gift wrapped to resemble a mail box and to wish him well on his road to retirement.

Everyone present filled their plates with scrambled eggs, fruit compote, biscuits and sausage gravy, and hash brown potatoes with onions and green peppers. Coffee and orange juice were also available. Gathering for breakfast on birthdays is a tradition at the Chinook Post Office, according to postmistress Leta Buck. "We always have a potluck meal to celebrate birthdays, and Brian would often bring his griddle and make pancakes. He'll be missed," Buck said.

Baker began working as a rural mail carrier for the Chinook office in 2005, but prior to that he served as a clerk for six years in the Harlem Post Office when Dan O'Leary was postmaster and the office was located uptown. When the Harlem office began talking about changes and cuts, Baker moved on, but observed that had he stayed, he could have moved into the postmaster position in that office.

When asked about his most memorable moments of working with the USPS, Baker replied: "That can't be put in print! After all, this is a family newspaper!" However, he did admit that there were challenges, and named trying to see the road during the snowstorms common to the Hi-Line during winter as one of the most challenging aspects of his work. He also expressed gratitude for the good patrons on his route who rarely voiced any complaints.

As he accepted gifts and well-wishes from his colleagues, Baker reflected on his retirement. "I picked today for my retirement because it's my birthday," Baker laughed. "Retirement is my birthday present to myself. Besides, I realized I couldn't outlast my latest boss!"

Many of us likely know that retirement is a fleeting concept. After being asked what he would do now that he has retired, Baker responded: "Well, I can't live on Social Security, so I will serve as a substitute mail carrier in both Harlem and Chinook. I might disconnect my phone in the wintertime, though," he chuckled, "and if I work long enough in Harlem for another retirement party, I'll invite you all to it!"

Commenting on Baker's retirement, fellow rural mail carrier Bill MacLean said that Baker would be missed most for his knowledge and expertise with vehicles. "He could always answer our vehicle questions. Since he ran that garage in Harlem for several years, Brian is a good reference and sounding board about mechanical issues," MacLean said.

Postal Clerk Ruth Hawley added, "When my car quit on me one time, Brian rescued me, and I was grateful for his help, but he gave a whole different meaning to the experience of being towed. I envisioned a ramp type trailer and slow progress, not a rope and high speed!"

Another postal employee, Ruth Brown, retired in November after eleven years of service, but with her birthday on April 7 and her having served as a substitute for Baker during her time with the USPS, she was invited for the celebration. Brown said her retirement so far has been a busy one: "It's a work camp at my house. I have lambs to jug and cows to calve." Brown's colleagues admitted that they will miss her animal stories, especially those told during lambing and about her dogs.

Once everyone had emptied their plates and exhausted their storytelling, Buck thanked her employees for their years of service and presented Brown with a bouquet of daffodils and both Baker and Brown with an angel food cake baked and decorated by Ginger Maddox. With the party beginning to deflate, Baker said, "If we don't get to work, we're likely to get fired!" So, mail was loaded into vehicles, and the group dispersed.

Jon Klobofski will take over Route One, the rural mail route previously operated by Baker. According to Baker, that route covers from Chinook to Eight Mile Hill, then South of Zurich, and back up the Milk River Valley. The route is 58 miles three days a week and 48 miles the other three days.