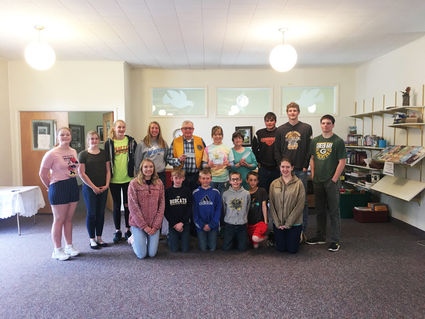 Members of the Valley Clovers 4-H club have participated in a Butterbraid fundraiser for several years now. The youth decided that his year they would donate all of their profits to 3 different organizations in Chinook. The challenge was put out to the kids to sell to at least 10 people. A great response was given and the club was able to write 3 separate checks in the amount of $670 and given to the Lions park fund, PAWS, and Chinook Food Pantry. Pictured here are Clara Laird, Morgan Friede, Belle Elliot, Kadia Miller, Lions Member Richard Cronk, Paws representative Bonnie Weber, Food pantry manager Wilma Mellvile, Erik Pula, Reese Elliot, and Ross Reed. Front row is Kourtney Hanson, Henry Miller, Walter Schoen, Jameson Nordboe, Jefferson Nordboe and Allyssa Schoen..

The fourth meeting for the Valley Clovers 4-H club was held on January 13, 2019, at Walner Hall. The meeting was called to order at 1:05 pm by President Kourtney Hansen. During the meeting, we discussed what we going to do for the Montana Seed Show, the fundraising we were going to do, and birthday boxes for the food bank. We talked about these topics and in the end, we got a seed show committee, set date for birthday boxes and an idea for fundraising. The meeting was concluded and the next meeting date was set.