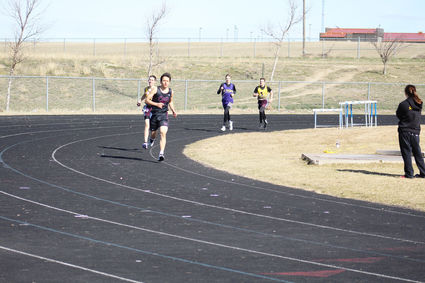 Harlem junior Brad Cichosz makes his way around the track at the Havre Lions Invitational. Cichosz had a fantastic day, winning both the 1,600 Meter and 3,200 Meter races

Another week is in the books for area thinclads and two athletes have secured a spot at the state meet the end of may.

The addition of state qualifying times and marks in both the Class C and Class B ranks has been well received and currently Chinook senior Megan Molyneaux and Harlem junior L'Tia Lawrence have secured their spot at the state meet.

Molyneaux finished second in the 100 Meter Dash at the Lions Invitational on Saturday, but her time of :13.00 eclipsed the state qualifying standard of :13.16.