South of the Border:"English Boy 1908:" a mysterious grave in the Whitlash Cemetery 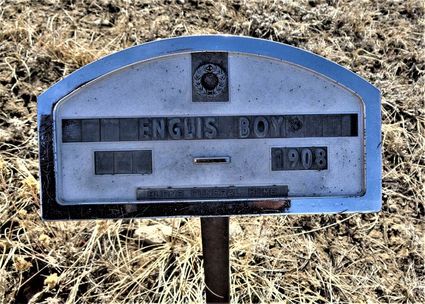 This is a photo of a grave marker in the Whitlash Cemetery for "Englis Boy" who died in 1908. "Englis Boy" is on the grave marker and official plat sheet showing each grave site but in the official cemetery register the name is written "English Boy (?)." There are varied local explanations about who is buried in the grave and how they died. The Whitlash Cemetery is about a half mile west of town.

South of the Border,

Columnist's note: Recently Betty Ann Wolery, secretary for the Liberty County Cemetery Board, stopped me in the library in Chester and asked if I knew about the "English Boy" grave in the Whitlash Cemetery. I'd heard one story that told the English Boy was a sheepherder from England who died in a blizzard. I had never seen the grave.

Betty Ann showed me the county cemetery register and a plat map of the grave sites in the Whitlash Cemetery. The first entry for names beginning with "E" was this: "English Boy (?)" and "1908" in the column for date of death. Later I hiked up to the Whitlash Cemetery (on a hill about a half mile west of town) and found the grave. Several graves along the east perimeter of the cemetery were marked with 'temporary' metal headstones and the marker of interest read "Englis Boy" and "1908."

For an event that happened 110+ years ago and has no documented history, the chances of discovering the English Boy's identity seemed remote. I interviewed several longtime residents about the grave and had help using census data from the turn of the century to explain the mysterious grave. Here's two explanations that are plausible, but both fail to provide a totally verifiable answer.

Montana's sheep and sheepherders around 1900

Sheep ranches in the Sweet Grass Hills started between 1880 and the 1900's. In 1870 one of the first livestock reports showed 2000 sheep in Montana. By 1885 one million sheep were reported and in 1910, the peak of sheep production in the state, six million were being raised.

Early sheep ranchers faced a number of challenges. Finding sheepherders was difficult as herding sheep did not pay well and was fraught with hazards from wild animal attacks to death from severe weather events. One writer noted sheepherders were often men who "were failures in all walks of life. As a last resort they took up herding sheep."

Revisions to the Homestead Act in 1909 and 1912 opened more land for homesteaders and adequate range for sheep declined. Ironically, many early sheepherders were homesteaders who took seasonal jobs on sheep ranches to generate cash they needed to prove up their homesteads.

Doug Demarest lives on a ranch about a mile north of Whitlash. Doug's family has followed and recorded much of the local history about Whitlash and the Hills. I called Doug since the story about the English Boy being a shepherd who froze in a storm was attributed to Doug's father, Claude. I was hoping Doug had some specific information to back up the story.

By phone Doug said, "I sort of remember my dad talking about a homesteader who lived for a time up above the Thompson ranch (about two miles southeast of Whitlash where Chance and Jessie Thompson now have a cattle operation) in a sort of rough spot (Upper Hawley Hill)." Doug said he couldn't recall reading anything about the English Boy or the grave at the Whitlash Cemetery. He suggested I call Earl Thompson, the grandson of the people who bought the Thompson ranch in 1907.

Earl and Sunnie Lou left the ranch in the early 2000's and moved to Lewistown. I called Earl and he told how his grandfather bought the place from two bachelor homesteaders. Earl said, "I think there was an old homestead site above us, but I don't ever recall anyone talking about the "English Boy" you're describing." He was not familiar with the 1908 grave in the Whitlash Cemetery.

On a visit to Chinook I asked Kadie Dahl, the Library Clerk at the Blaine County Library, if she was familiar with census data from around the early 1900's. Since hearing the story about the unmarked grave being that of an English shepherd I thought perhaps the census data would show such a person in the area. Kadie looked at the 1900 census to find young males born in England, living in the Hills and who were listed as shepherds. She found only one person who met all those qualifications: George Ward. I could find no subsequent burial records in Montana for Ward. 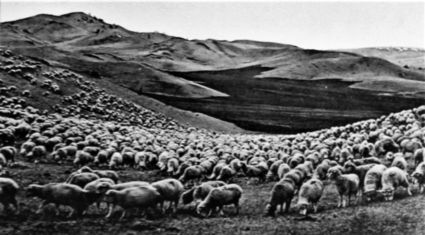 Charles Morris, a cowboy turned photographer, at various times had a studio in Chinook and Big Sandy. Morris saw the open range vanishing as homesteaders staked their claims and put up fences. He taught himself photography and documented the disappearing life styles of cowboys, sheepherders and native Americans on the open range in north central Montana. In 1910 there were six million sheep reported in Montana

At the time of the 1900 census Ward was 19 years old, had immigrated from England 11 years before and was shown living in Sweet Grass-a community on the border with Canada north of the Hills. Ward was living with four other men, two showed occupations as "sheep ranchers," two listed as "shepherds," and one was listed as a "hunter." The head of this household was Robert Christian, a 40 year old immigrant from England. Robert and his brother, Edward, had a sheep ranch east of Gold Butte where Coal Mine Road and Miners Coulee road now intersect.

See Page B4: South of the Boarder

I posed this explanation to a local rancher who said, If Ward is the English Boy, why wasn't he buried at Gold Butte...that cemetery was closer to the Christian's ranch than Whitlash?" One explanation might be that Ward got caught in severe weather following sheep who tend to 'drift' during bad weather. That could have taken him to an area where his body was found, near Whitlash, and no one knew him.

Alert readers can likely think of other reasons why it's not George Ward-like another shepherd could have come from England after the 1900 census and before the recorded death in 1908. Really, the possibilities for other explanations are numerous and maybe more realistic. For now, given what I could find, "that's my story and I'm sticking with it." If someone has better information about the English Boy, please contact me through the newspaper. I'd love to get it right if at all possible.