Chinook Golfers continue to shine on the links, 5 qualified for state tournament 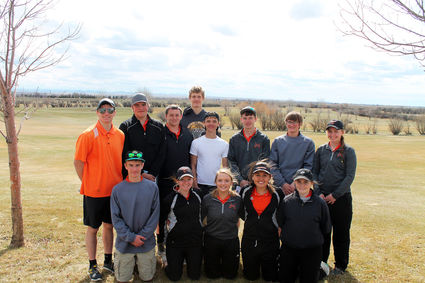 The Chinook Sugarbeeter High School Golf Team has gotten their season off to quit a start. The 'Beeters have qualified five for the State C Tournament in Seeley next month. Last week in Wolf Point at the Class B Poplar Invitational the girls won the team championship with a 409. The quartet included state qualifiers Hailey Bell 3rd, Crystal Hofer 6th, Alyssa Gruszie 7th, Ashley MacLeod and Kendra McMaster. Chinook's Chase Moxley is the boys lone qualify thus far.

Getting on the course to play competitively has been the toughest part of the season so far for local golf teams. When they have been able to compete, the Sugarbeeters have performed very well.

The team was in Wolf Point last Tuesday for the Poplar Invitational being played at the Wolf Point Golf Course.

The tournament was a Class B tournament meaning that each team played five golfers and scored four versus a Class C tournament where four are played and three are scored.

The 'Beeter girls have qualified four for the State C already and were primed to do well in Wolf Point. They did just th...