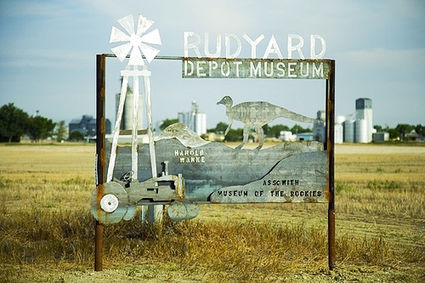 On May 1, spring field trips will continue as the third graders at Meadowlark Elementary School will be travelling to he Depot Museum in Rudyard. After their museum visit, they plan to stop at the Havre City Pool on Sixth Avenue to go swimming.

According to third grader teacher Mrs. Bridget Metcalfe, the experience will provide education: "We will be learning about animal and plant fossils and more about how the world around us used to be."

Located at number 25 Fourth Avenue Northwest in Rudyard, the Depot Museum is on Montana's Dinosaur Trail. Since its opening in 2006 as part of the Depot Museum, the Rudyard Dinosaur Museum has seen over 1000 visitors. The designation as a Montana Dinosaur Trail location means that the facility offers unique paleontology displays, replicas, or actual skeletons of dinosaurs and other fossils found in Montana.

For years, the Rudyard area has been providing dinosaur specimens for the Museum of the Rockies in Bozeman and for other premier institutions. The "Dino Museum's" signature exhibit is the 'Oldest Sorehead,' which is a fully articulated Gryposaurus found in the area. Fully articulated implies that the bones were joined as they would have been when the dinosaur was alive. Along with this 'hook-nosed lizard,' the facility's lifelike duck-billed dinosaur-a Maiasaura specimen-and egg nest display give visitors a glimpse into the long-ago lives of these ancient creatures.

In addition to the Maiasaura and the Gryposaurus, the museum offers other permanent and changing dinosaur exhibits, including a Troodon and a Tarasaurus, as well as recreations of other dinosaurs from bones found locally. Because paleontologists continue to work in the area, museum curators are constantly adding to the museum's fossil and artifact collections in their commitment to improving the visitor experience.

Given that the Depot Museum operates in conjunction with the Museum of the Rockies, they can rotate their dinosaur exhibits. Currently, their Gryposaurus is displayed as five large casts. As work in the dig north of Rudyard progresses, the Depot will reveal more of the Gyrposaurus. When finalized, the display will look as if the dinosaur simply lay down on the coulee bank.

After the Rudyard Historical Society formed in April of 1994, they acquired the local railroad depot, moved it to a permanent location, and renovated it for a museum. Their mission was to house both the written and physical history of the Hi-Line towns of Joplin, Inverness, Rudyard, Hingham, Gildford, and Kremlin. Besides railroad history, the Depot Museum also displays items representing other eras from homesteading onward. These include recreations of various post offices and a school house with a teacherage, all furnished with the decor and mementos of early schools. Similarly, a homestead shack complete with furnishings and a blacksmith shop with its applicable tools are featured. Other items included in the museum's collection are farm machinery, such as tractors, old-time harvesting equipment, headers, and threshing machinery. 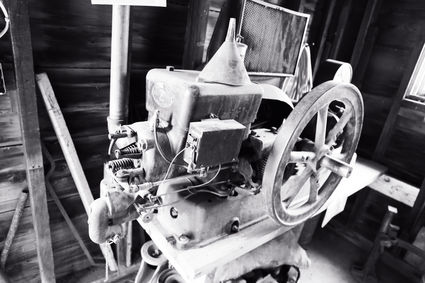 Main Street in Rudyard is also home to Hi-Line Vintage Motors Museum, where numerous vintage vehicles are on display. Like the Dino Museum, it began in the summer of 2006 when a tourist from Germany bought the Phillips Building to house antique and restored autos. The community, along with the museum crew, worked to restore the old building and to create a new home for the historical autos that previously were simply parked outside on the museum grounds.

Currently, Hi-Line Vintage Motors Museum houses twenty-one automobiles, ranging from a 1915 Model T car to a 1976 Cadillac El Dorado and a few 1926-28 pickup trucks. The building itself, fashioned in 1947 from field rock, is on the registry of National Historical Buildings. Curtis Phillips built the structure and operated his Minneapolis Molene Implement dealership from this location for approximately 45 years.

With all this history on parade, museums will provide off-campus classrooms for Meadowlark School third graders on the first of May-just as Havre City Pool will provide the space for physical education.