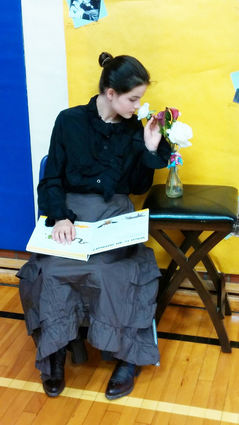 Sara Chaffin characterizes Helen Keller, an American educator who overcame the challenge of being blind and deaf to become one of the 20th century's leading humanitarians, as well as co-founder of the American Civil Liberties Union. She was also the first deaf-blind person to earn a Bachelor of Arts degree.

On Thursday, April 18, the fifth graders at Meadowlark Elementary held their Wax Museum in the school's gymnasium. A sizable crowd gathered to see the presentation of Heroes and Heroines who had made an impact on United States history.

Each student in turn approached the microphone and delivered a brief narrative in which he/she gave the historical figure's name and birth date. Then, these heroes or heroines shared something interesting about themselves or their lives, a detail about how they would like to be remembered, and a Did You Know fact.

After the oral presentations, the students of Mrs. Lesa MacLeod and Mrs. Jill Paulsen took their positions around the gym's perimeter and posed as their living wax figures while the audience meandered from station to station, taking pictures or reading the students' reports and banners of information. The event had a "gallery walk" feel to it, as students had created period specific costumes and gathered props in order to lend a historical relevance to their selected personality. Many had also crafted written presentations to capture the essence of the historical figure's life journey and achievements.

Students portrayed some typical candidates, such as explorers and inventors, musicians and athletes, rodeo greats and activists. But there were some unique choices, too, such as Clinton Anderson, an Australian clinician, horse trainer and horsemanship competitor portrayed by Fletcher Anderson; and Jay Pyette, the founder of Montana Actor's Theater in Havre portrayed by Mara Edwards. The following heroes and heroines were represented-some living and others deceased: 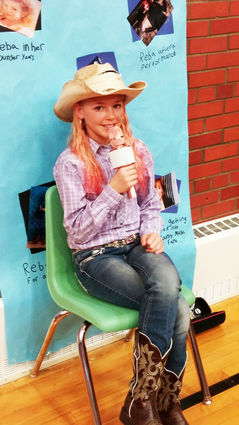 Kirbey Hofeldt plays the role of country singer, songwriter, actress, and record producer Reba McEntire. One of the most successful female recording artists in history, McEntire has sold over 56 million albums worldwide and is a member of the Country Music Hall of Fame and Hollywood Bowl Hall of Fame. With #1 hits that span four decades, she has been called the biggest female hitmaker in Country music history.

According to MacLeod, the goal of this project was to showcase historical figures who have made an impact on United States history or who have made the world a better place in one way or another. "Any historical figure was fair game so long as the individual had or has made a lasting and positive contribution to his or her field or to humanity in general. The students themselves decided what they considered that contribution to be," MacLeod said.

The Living Wax Museum demonstrated evidence of the students' learning not only about various historical figures but about poise under pressure and about how much they can accomplish when given the power to choose.