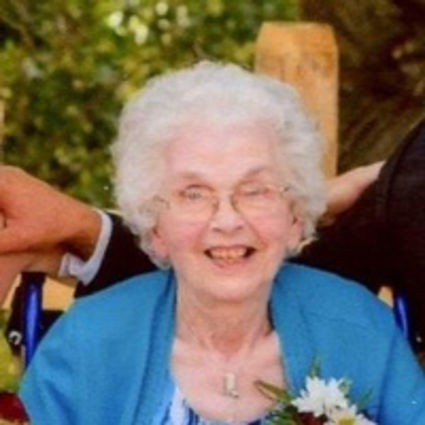 Betty M. Waid, 88, passed away due to natural causes at the Care and Comfort Home on Saturday, April 20, 2019. Cremation has taken place, and a celebration of Betty's life was held at 1:00 p.m. on Thursday, April 25, 2019, at Van Orsdel United Methodist Church with Pastor Mac McGrew officiating. Burial followed in the Highland Cemetery. Betty's family has suggested memorial donations be made in her name to the Havre Senior Center or Van Orsdel United Methodist Church. Holland & Bonine Funeral Home has been entrusted with services and arrangements. Please visit Betty's online memorial page and leave a message of condolence for her family at http://www.hollandbonine.com.

Betty was born on July 5, 1930, in Chinook, to Peter and Mary (Simko) Hiebert. She was raised north of Chinook until she was 7 years old, and then her family moved to south of Zurich. They remained there until 1945, when they moved to south of Havre on Clear Creek Road. Betty graduated from Havre High School in 1948. As a young girl, she worked at Sacred Heart Hospital and FA Buttrey Co. On July 30, 1950, she married the love of her life, Robert S. Waid, and together they raised their six children. Betty lived and worked in the Havre area for the rest of her life. She and Robert left the ranch south of Havre and moved into town in 1995. Betty was baptized in the United Methodist Church in 1947, and joined the church in 2005, but had been active in the church since moving to town. Betty's relationship with God was very important to her throughout her life. She loved her role of wife, mother, and grandmother. She was a past 4-H leader for 23 years; enjoyed doing volunteer work at the soup kitchen, senior center, and church activities; working in the yard; and crocheting afghans.

She was preceded in death by her husband Robert in 2004; grandson Brent Waid; her parents Peter and Mary Hiebert; brothers William F. Hiebert, Robert Hiebert, and Ben Hiebert; and step-father Walter Neuwerth.