A traditional saying claims that "April showers bring May flowers," but as the ground thaws and spring rolls into full swing, construction projects are also beginning to bloom. The Blaine County Fair Foundation (BCFF) has been busily making plans for construction of the Indoor Event Center, and the Bear Paw Roundup has been building chutes.

According to Dale Williams, President of the BCFF, the Foundation is eager to get construction underway since one of the grants they applied for is holding them to a September completion date.

"When Laura Kleinjan originally applied for this grant, September 2019 was a deadline for completion of certain aspects of the building, not the complete building. But the person with whom she discussed our situation and who gave us the green light, no longer works with that granting agency. So, we're trying to line up contractors and subcontractors to keep our project on track and in compliance with the grant," Williams said.

The current hold-up seems to hinge on the building's potential snow load. The concern arose after part of the roof at a Montana State University fitness center in Bozeman collapsed in early March. Assessments from engineers suggest that the older materials and the unprecedented snowfall in February may have contributed to the collapse of the roof on the Bozeman campus.

"The building that we acquired from Malstrom Air Force Base is made of similar materials and from an era when buildings were engineered for normal precipitation, so we're waiting to determine a course of action," Williams said. "It was an unusual winter, but the contractor doesn't want to be held liable if something similar to what happened in Bozeman were to occur here," he added.

To date, all of the gravel to build up the site for the Indoor Event Center project has been hauled and the south east corner has been staked for water lines. Although no cement work has yet been done, the contractor is willing to build the footings.

The BCFF continues to raise funds with their commemorative bricks, and they have applied for additional grants. The Memorial Brick fundraiser involves the opportunity to purchase a custom brick memorializing a loved one, family ranch, individual, or business. As described by BCFF Secretary, Laura Kleinjan, the bricks can be engraved with a special message and be permanently displayed in the Indoor Event Center.

Memorial Bricks are available in two sizes: 4" x 8" or 8" x 8". The smaller bricks can be personalized with up to three lines of text, 20 characters and/or spaces per line. To the larger bricks, two additional lines of 20-character text each can be added. Any symbol-whether a comma, period or dash-is considered a character, and spaces also figure into the character count. For an additional cost, individuals can add brands, logos, or custom clip art. They can even purchase a mini replica of their brick.

To purchase a brick, interested persons can contact Kleinjan by calling 406-390-2651 or by going online at www. 4everbricks.com/BCF. Kleinjan will personally work with individuals to develop a design. Memorial Brick order forms are also available at the Fair Office located on 300 Cleveland Road West in Chinook. For answers to any questions, people can email Blainecountyfairfoundation@gmailcom. 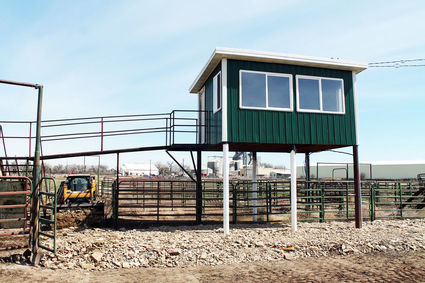 Meanwhile, in late April, a crew that included Dennis Kleinjan, Travis Skoyen, and Clinton Hansen worked on the chutes. They removed all the old chutes and corralled the replacements at the arena, staging them for installation.

President of the Bear Paw Roundup, Dennis Kleinjan reported that Dan Moxley of Moxley Construction was slated to arrive for work on Monday, April 29, but the weekend snow and freezing temperatures delayed that plan until Wednesday morning, May 1, when Moxley began the work to build a pad where the chutes will sit. Because the new chutes are portable, crews will be able to move them into the Indoor Event Center when needed for events scheduled at that facility.

"Things are coming together," Kleinjan said of the Bear Paw Roundup's chute construction project. "We'll be ready for the rodeo on Friday and Saturday of the fair this July 5th and 6th!"