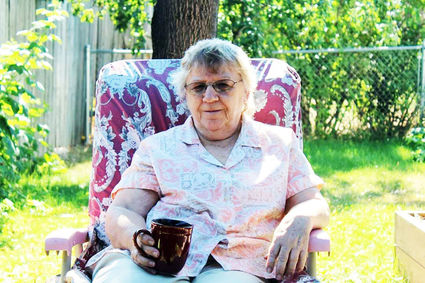 Mary Ellen (Ferguson) Strait was born July 8, 1934 in Wood River Illinois to Frank Ferguson and Jessie Owens. She was the fifth of seven children. Mary and her family moved to Wolf Point in 1944, where she met her first husband, Doyle Anderson. Together they had two daughters, Vicki, and Joan.

After going back to school and receiving her diploma, Mary worked for her brother-in-law, Chet Wienke as a bookkeeper.

Mary and Doyle Divorced in 1957. Later Mary married Clarence Goodsell, and together had two sons , Collin, and Joey.

During this time in her life Mary took an interest in the medical field. She worked for Dr. Borgie in Wolf Point. Soon Mary and her family moved to Billings, where she worked at the Deaconess Hospital. Mary and Clarence were divorced in 1965.

Mary's third marriage was short lived after discovering his patent for lying.

Mary went back to school and became an L.P.N. She worked in this field until she met her fourth and final husband, Hugh Strait.

She left quit an impression on those around her with a witty sense of humor, quick wit and an uncanny spirit of independence.

Following Hugh's death Mary remained in Columbia Falls until she suffered a heart attack in May of 2018, and was moved closer to family in Chinook.

While in Chinook she resided at the Sweet Memorial Nursing until her passing.

Mary had dealt with many health issues during her final year.

Mary passed away early in the morning, March 29, 2019, at Northern Montana Hospital.