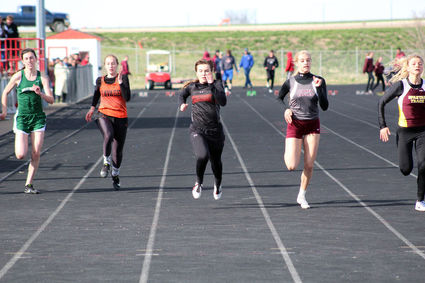 Chinook senior Megan Molyneaux competes in the 100 Meter Dash at the North/East Top 10 in Glasgow last Tuesday. Molyneaux has already qualified for the State C in the event and finished third at the Top 10.

Teams are ready to make the push to their respective state track and field meets later this month as they head to the District 2B and 9C meets this week.

The Harlem Wildcats will be in Wolf Point this Saturday to compete in the District 2B meet. The Sugarbeeters, Thunderbirds and Tornadoes will compete at the District 9C today, Wednesday, May 8, at the Havre Middle School Track.

Teams were in Glasgow for the North/East Top 10 which features the 10 best individuals in each event, to include athletes from the Class A, B and C ranks.

There were several local athletes that shined at this premie...