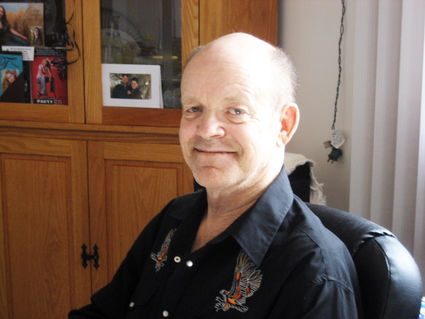 Robert Dennis Harrison was born May 11, 1948 in Havre. He was the 5th of 6 children born to Norris and Opal (Wolery) Harrison. Robert passed away May 6, 2019 at Sweet Nursing Home in Chinook just 5 days short of his 71st birthday. Robert's birthday was always a big deal to him and he usually wanted strawberry shortcake! So after Mom passed away, we made sure he had strawberry shortcake for his birthday. Robert grew up on the family farm north of Joplin and as he got older, farmed with his dad. When his dad retired, Robert did the farming for several years living by himself on the farm during the summer. He lived in Rudyard in the winter. He was a good cook with his mom's guidance and encouragement. Robert liked working with wood and was very creative. He made "pig" step stools, yard and deck ornaments and many styles of wooden cars with wheels that turned which made his young nieces and nephews happy! I am sure there are many of his little cars in their hands yet! Robert kept busy most of the time building things with wood.

Robert never married and had no children, but his 15 nieces and nephews were very important to him when he was younger and could play with them. He also ended up with several great and great-great nieces and nephews... some of whom he didn't get to meet in this life. They all loved "Uncle Wobert"! He spent the last 11 years in a care center and was impatient to get to Heaven. However, this happens in God's time, as we tried to tell him (and he knew) but we are sure he is happy now. We are so thankful for the excellent care he received at Sweet Home in Chinook and the special care from his niece, Jenni and her family.

From the time he was born, Robert was troubled with mental illness, but it is so much fun to look at his childhood pictures and see a happy little boy. He had a kind heart, and he far surpassed the doctor's predictions at his birth as far as his capabilities in life. We feel this was because of the tender loving care of our parents, and the optimism they had that he could function as a person, which he did. It was partly because of Robert that our mother could be at home instead of the nursing home near the end of her life...... he was her caregiver, sometimes not so gently!! But Robert and Mom had a special bond.

He liked farming and especially his John Deere tractor! He took care of the farm in a timely manner and felt good about his ability to do so. And Robert liked to travel and see new places. He and his parents went on a number to memorable trips. Robert has seen the Pacific Ocean and the Space Needle at Seattle, visited Glacier and Yellowstone Parks as well as the Lewis and Clark Caverns here in Montana. He has been to Canada to the Writing on the Stone Park and to Lethbridge and Calgary. He visited Disneyland, Knott's Berry Farm, San Diego in California. Also at El Centro, California they visited a huge feedlot managed by his cousin Rick. He saw the Grand Canyon, Bryce Canyon, Salt Lake City and places in between!! Knowing our dad, we are sure they got lost a time or two and saw even more country!!

Robert is survived by brother, Lyle and his family; sisters, Elaine Hodges and her family, Jeannie Stone and her family, Shirley (Donald) Rudolph and their family; sisters-in-law, Nancy Harrison, Jean Harrison and her family; one aunt, Fern Wolery; and numerous cousins, many of whom he grew up with. He was preceded in death by his parents; his brother, Donald; brother-in-law, Willie Hodges; an infant niece, Tanya Stone; two cousins; and his uncles and aunts.

Graveside services will be Friday, June 14, at 2:00 PM at Rudyard Cemetery.

Condolences can be made to Robert's memorial page at http://www.asperfh.com.