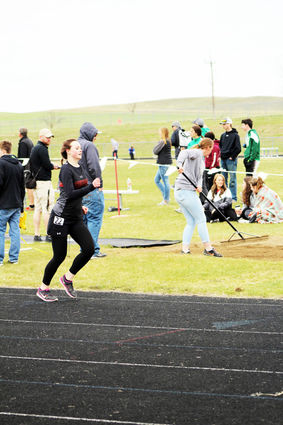 Chinook junior Raynee Hasler won both the 1,600 and 3,200 Meter runs at the District 9C Track and Field Meet last Wednesday.

The Chinook Sugarbeeter girls finished second at the District 9 C Track and Field Meet last Wednesday at the Havre Middle School complex. The 'Beeters racked up 98 points winning four events. The Turner Tornadoes finished third with 54 points. The Chinook boys finished in a tie for third with 76 points, just two out of second.

In Wolf Point the Harlem Wildcat girls and boys Track and Field Teams competed in the District 2B Meet. The girls finished fourth with 59 points while the boys were fifth, scoring 23.

At the District 2B, Harlem junior L'Tia Lawrence continued her dominance on the trac...