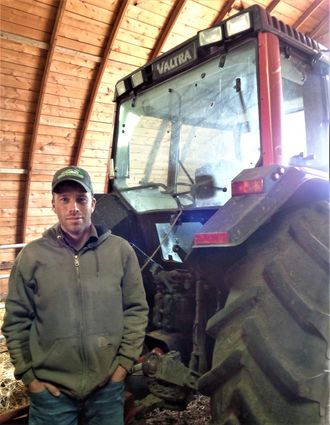 Chance Thompson poses by his model 6800 Valtra at his cattle operation in the Sweet Grass Hills near Whitlash. He bought the 2002 tractor about 10 years ago with 300 operating hours on it. As to reliability, he described the tractor as "pretty much bullet-proof." The Finnish-made tractors were last sold new in the U.S. about 10 years ago.

Columnist's note: A tractor sitting by a shed near the Whitlash Post Office drew my attention when we first moved to town. It was a Belarus, which sure sounded Russian to me. Some stickers and name plates on the tractor stated the tractor was built at a factory in Minsk, the capital city for Belarus. Belarus is an eastern European country once part of the old Soviet Union. Turns out the tractor is owned by Urban Kultgen and his son Dan. Between the two of them they own three of the Russian-built tractors.

I started asking locals about other tractors in the immediate area that...