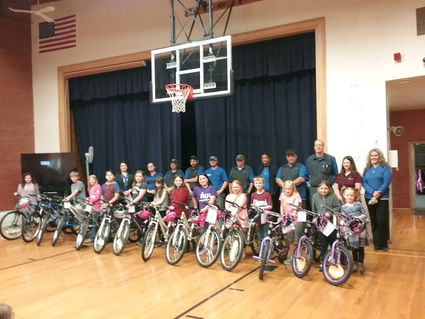 At the Meadowlark Elementary School's end of year assembly held on Friday, May 24, fourteen fortunate students wearing helmets donated by First Bank rode off on bicycles donated by American Garage.

According to co-owner of American Garage Heather DePriest, for the fourth consecutive year, the business has donated bikes to young people at the elementary school who have excellent attendance and no negative behavioral events. This year, they partnered with First Bank to offer helmets to the winners as well.

"When Heather DePriest contacted me about donating helmets to the students, I loved the idea of encouraging bicycle safety. By providing young people with the proper safety equipment, I hope they will be excited to stay active throughout the summer," Branch President for First Bank of Montana in Chinook, Jessica Aberg said.

American Garage started the bike giveaway in 2016 because they wanted area youth to know the importance of going to school and not "skipping" or being "tardy." The DePriests actually got the idea from a relative in Coeur d'Alene who told them about a school that did this very same giveaway by partnering with a car dealership in Idaho. Because the DePriests wanted to give back to the community, they decided to imitate the idea. "We could think of no better way to give back than to invest in our area kids," Heather DePriest said.

However, in the last two years, the couple learned that some parents were sending their children to school sick, just so they had a chance for a bike. Given that worrisome notion, this year, they implemented some changes so that doesn't happen anymore. Working in conjunction with the administration at Meadowlark Elementary, they adopted the following new criteria:

Students will be entered into a drawing for a bike for no behavior referrals per quarter and perfect attendance per quarter, exempting illness, medical appointments and bereavement. Students can receive up to eight tickets per year, one for having no referrals per quarter and one per quarter for perfect attendance with the above stated exemptions. There will also be one drawing for one bike that will be a teacher-directed drawing. There will be 15 total bikes given away. Teachers will be able to put students into a drawing who they feel are deserving of a bike at their discretion. The drawings will take place in the last quarter prior to the end of the year assembly with enough time for bikes to be purchased. Students will only be able to win one bike. A representative from Meadowlark School and American Garage will be present for the drawing.

Including the fourteen bikes that were awarded on Friday, American Garage has given away 48 bikes totaling around $5000. 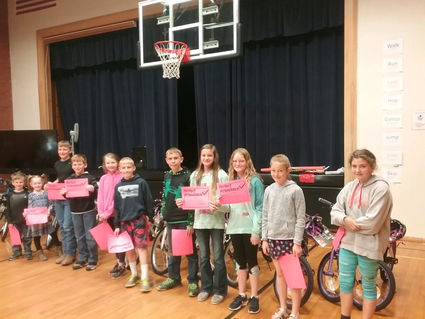 In addition, Outstanding Citizenship Awards were presented to students who-according to Principal Jonathan Martin-had gone above and beyond in their volunteering efforts and in making a difference in their school. These included Zoey Scofield, Kylee Green, and Falyn Cecrle.

Hannah Schoen also earned the top library award for having acquired the most Accelerated Reader points.

After presenting these awards, Martin shared a sixteen minute slideshow, celebrating the highlights of the 2018-2019 school year.