Cheers to Years of Experience Shared in Life Skills Unit 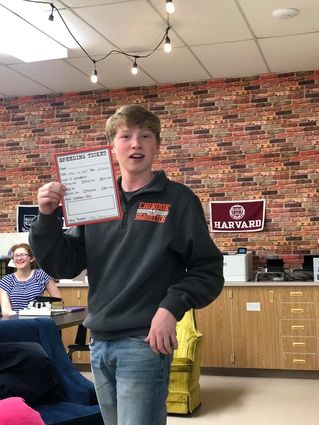 In a simulation exercise, Jaiden Kline learns the impact that a speeding ticket can have on vehicle insurance rates..

To keep her English 10 students at Chinook High School engaged during the final days of the school year and to close learning gaps as students grow towards career, college, and community readiness, Mrs. Julie Terry presented a unit called "Fifty Things I Didn't Learn in High School." The students chose topics from a list of fifty options, and Terry invited guest speakers in to present on those topics. On Monday, May 20, to close that unit, Erin and Michael Garrity of Triple Dog Brewing Company came in to share with the sophomores their story of starting their own business.

After handing out a loan application checklist, the Garritys told the class, "Be persistent. Don't allow the lending agencies or any other obstacles to discourage you. If you remain committed and accept failure as part of the learning process, you will succeed in business."

From their first visit to the lending agencies, to their loan being approved by the Bear Paw Development Group until they opened their doors to customers, the couple reported having invested two years of their time.

The pair spoke about the 20-hour days that business ownership required in the beginning and about how they couldn't afford to hire contractors or employees to help because they could not initially afford the workman's compensation insurance required. Instead, they relied heavily on family and friends and on their own skill and will-power, putting in the time required. Although the work load was discouraging and took both a physical and an emotional toll, they remained committed. "When people talk about the blood, sweat, and tears of business ownership, they really mean it," Michael said. "But five years later, we have the capital to buy a second walk-in cooler."

The pair also stressed the importance of drive and how sometimes a person has to act the part of a politician or a salesman with all the work required to perform public relations and marketing. Other times, the work requires accounting and bookkeeping talents. Because business ownership means that all the demands and responsibilities for success or failure fall on the owners, they have to do the research to ensure success. Brew Master Garrity spoke about needing a background in chemistry for everything from understanding the fermentation process to testing water pH levels for consistency in batches, to analyzing grain, hops, and water ratios, to manipulating those ingredients.

The Garritys further described seeking out other brewers and attending brew festivals, where they could consult with like-minded people, vent about common concerns and challenges, problem-solve, and support one another.

Sophomore Gavin Lemro wondered whether the Garritys had any hesitations about their decision to become independent business owners, and Michael responded: "You have to love what you do, since business ownership is strenuous and a lot more work than we thought. It's also important to choose your business partners or any investors with care."

"It's a big learning curve," Erin added. "If I had to do it all over again, I'd get a small business degree."

When Grace Ymzon asked, "What is it like to be your own boss?" Michael replied, "I get to write my own pay check, but I don't want to because it takes money from my business. Still, we have a mortgage to pay and groceries to buy, so it has to be done."

"Perhaps the best lesson we ever learned," Erin said, "is when another brewery opened in Havre. That was overwhelming and scary, but competition teaches you that you can't control what other people do. You can only control what you do and how you respond to someone else's actions."

Additional questions led to the Garritys' explaining the laws, rules and regulations that govern businesses like theirs and about the licenses and fees involved. They revealed that they are the 41st brewery in Montana and that they would have opened a hand-crafted pizza restaurant-something without a corporate affiliation-had they not opened a brewery.

Another really important aspect of business ownership is advertising and marketing, according to the Garritys. "It's huge, actually," Michael stressed. "A business' brand has to be attractive and interesting because sometimes you can capture a customer's loyalty with a logo, a tap handle design, a slogan, or a catchy name." The Garritys hired the graphic designers of Metcalf Media to design their videos, logos, and website.

That comment generated a question about how Triple Dog got its name. The couple explained that the name derives from the idea of accepting a dare of epic proportions and alludes to a scene in the 1983 comedy film "A Christmas Story" set in 1940 and directed by Bob Clark. In the film, one child double dog dares another child to touch a frozen flag pole with his tongue. A triple dog dare, then, would be an even bigger dare, and "No one believed us when we said we wanted to open a brewery, insisting that the proposition was just too risky," Erin said.

And here they are, five years later, still brewing beer and expanding. "We're a community-oriented business that tries to use local resources," Michael said. "Triple Dog Brewing Company has five staple beers on tap and usually serves three revolving seasonal brews. Our newest recipe, a vanilla oatmeal porter, is aging in whiskey barrels right now and will be ready in a couple of months."

Other individuals and businesses that were part of the sophomores' "Fifty Things" workshop series included Logan Terry, co-founder of Vintage Oil and Gas and owner of Big Sky Land and Title who explained the importance of saving money and investing in personal retirement with products like a Roth IRA; Lindsey Kellam, an accountant for Scharfe Kato who enlightened students on the processes for filing income taxes; Billie Haugen, a Blaine County Emergency Medical Technician who demonstrated basic first aid and life-saving measures; Crystal Stepper, an insurance agent with State Farm Insurance who described the protections needed when life demands that a person makes adjustments to changing circumstances-whether those involve the birth of a child, receiving a speeding ticket, or getting sued. Stepper was assisted by employee Emilee Unruh in educating and engaging students on the topic of adequate insurance.

The sophomores' response to the series was positive, and they reported favoring the State Farm presentation because it involved games, a little red car, and role-playing scenarios. At the end of the unit, they reflected on what literacies they already possess, what learning will be required of them in the future, and how to close any gaps. 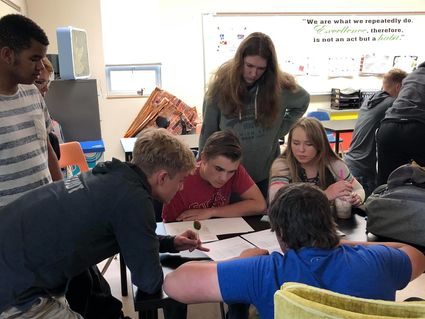 With this unit, Terry hopes that students will find tangible connections between their own learning and the skills necessary to navigate tasks they will complete beyond high school. "I hope they recognize that while we might not teach them to do their taxes, we do teach them to read, to do math, to communicate questions, and to seek out answers," Terry said. "After all, education isn't about learning to build the perfect box. It's about mastering the use of a hammer and a saw so you can build whatever you want. It's less about creating a specific product and more about mastering the tools necessary to do so. It's about learning to learn. And, with any luck, we can have some fun in the process!"

Mrs. Terry expressed special thanks to all of the presenters for what she described as "super fun and highly educational presentations." Terry added, "I'm so thankful for people who give up valuable time to speak to my students!"