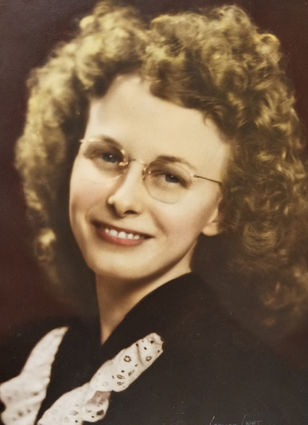 Elinor Warren 95, passed away peacefully June 7, 2019 in Belgrade surrounded by her loved ones. She was born July 18, 1923 at the Sacred Heart Hospital in Havre, Montana. Elinor was the second child and oldest daughter, of George and Hermina Fairbank. Her parents claimed her for Christ through Baptism at St Thomas Parish in Harlem on August 26, 1923. She received Jesus in First Holy Communion in May 1930 and Confirmed in the Holy Spirit in 1935.

She spent her childhood on the family homestead north of Turner, where her father farmed and she and her five siblings lived their childhood, working the land.

Upon graduation from Harlem High School, she worked in Zurich cleaning house for the post master. She then moved to Helena and found a job through the Job Corp working in an office. She lived in a big house with other young women her age and a house mother to watch over them. She joined the war effort when the airport in Helena offered a program tearing down airplane engines and putting them back together and she also learned to weld. She then moved to Spokane WA and sand blasted bearings for airplanes until the war ended in September of 1945. She had kept in contact with an old friend Ruth, who had moved to San Francisco. She joined Ruth and worked in a Catholic Hospital as a candy striper for two years. She caught the trolley or bus to work each day. She got lonesome for the four seasons and came back to Montana and worked for Roxie and Leo Petrie helping with the kids, cooking and cleaning house. Roxie and Leo introduced her to Thaine Warren, they courted for several months and entered into the covenant of Matrimony on January 2, 1948. They moved into the Warren home, which was a converted school house, and lived with Thaine's parents, Guy and Annetta for 3 years. Upon the remodeling of a home a couple of miles west, Guy and Annetta moved there and Thaine and Elinor raised their six children at the home place. They worked the land, planted big gardens, milked cows, killed chickens by the hundreds, raised cattle, plowed snow in the winter time to get the kids to school and led a good God fearing life.

Elinor was very active in the local community and supported her children in all their endeavors. She was a member of the American Legion Auxiliary, served a term as president, sold poppies and supported the Legion in many ways. She was very involved in the St Thomas Aquinas Catholic Church, teaching the catechism class when her kids were young, cooking and cleaning for all the functions that took place at the "little church on the prairie".

As their children grew and married they visited them and the grandchildren and made many trips to attend family reunions and visiting lifelong friends.

In 2002 they retired from the farm and moved to Chinook. While there she added one more layer to her spiritual life by became a member of the Secular Franciscan Community. Upon Thaine's death Elinor stayed in Chinook for a number of years, moving to Havre to Timber Creek, an assisted living facility, and then to Bozeman to be closer to her daughters. God blessed Elinor with a full life, the love of a good man, children devoted to her, lots of hard work and many happy times. Her love for God grew as the years past and part of each day was spent attending Mass, saying the rosary, and praying the Divine Mercy Chaplet.