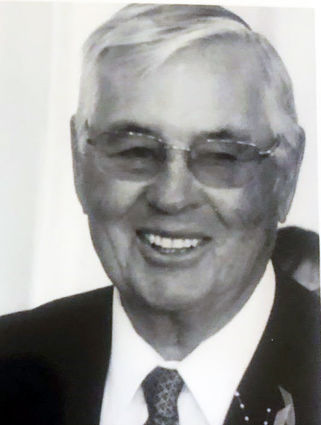 Jack Alan Van Voast of Turner, MT passed away June 21, 2019 in Great Falls, MT. Jack was born to Jess and Cora Van Voast in Turner, MT September 30th, 1932. He attended school & graduated from Turner High School & attended Northern Montana College for a time. Jack & Carla Dolven were married at the Presbyterian Church in Harlem, and were going to celebrate their 66th anniversary on November 8, 2019.

Jack served in the Army from 1955 to1957, stationed in Virginia, returning to live in Havre after his discharge. While living in Havre, he learned to fly and bought his first airplane. He always loved to fly and encouraged others to fly as well. He worked various jobs, and Carla worked for the Great Northern Railway. In 1964, they moved to Turner to the home place, where he and Carla raised their three sons, and continued farming and ranching. In the late 90s, he leased the place to his sons, however he continued to share his expertise and experience with his boys. He spoke fondly of farming, saying he never regretted choosing to be a farmer and loved every minute of it.

Jack served on the Turner School Board, and was a Director of Security State Bank in Harlem for several years. He was a charter member of the Lions Club in Turner, as well as a member of the American Legion, the Eagles, and the National Farmers' Organization. He was a founding partner in the EZ-Mart. Jack was a member of the Turner Christian Church and was impressed with the new structure built to house their congregation.

Jack and Carla loved to travel. Various travelling partners include his brother Dean and Dean's wife Rose, Leon and Nellie Cederberg, and Dick and Florence Hamilton. They spent several winters in the South Padre Islands, Mexico, and Lake Havasu, Arizona where they met many new friends. They were joined in Lake Havasu by Jack's Army buddy George and MaryLou Dugan of Kansas. They also enjoyed the annual family reunion at his brother Curt's property at Flathead Lake.

Jack was a good man, a great husband and father, and an unfailing optimist, finding the good in every challenge. One example of his humor and optimism, as oftentimes happens on the Big Flat, the wind blows and the dust flies. He would say "at least it's keeping the mosquitoes down." He was always upbeat, encouraging, and willing to help his neighbors and the community he loved. Services were held at the Turner Christian Church at 11:00 on Tuesday June 25, 2019.