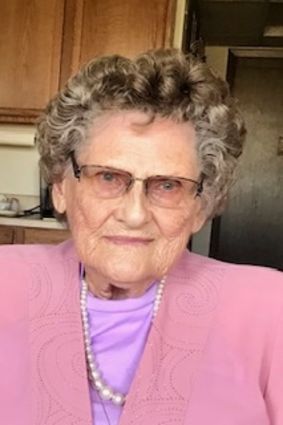 Virginia May D'Hooge, age 94, of Havre, passed away Tuesday, July 16, 2019 at Northern Montana Hospital due to natural causes. Cremation has taken place and Memorial Services were held on Monday, July 22, 2019 at 3:00 p.m. at St. Jude Thaddeus Catholic Church. Memorials in Virginia's name may be made to Havre Youth Baseball Association, Boys and Girls Club of the Hi-line or St. Jude School. Holland and Bonine Funeral Home has been entrusted with services and arrangements. Please visit Virginia's online memorial page and leave a message of condolence for her family at http://www.hollandbonine.com.

Virginia was born on June 9, 1925 to Paul and Regna (Staven) Oberg in Zurich. She was raised on the family farm in Zurich and attended school there. After finishing school she taught at the country school house in Lloyd for a short time. On December 29, 1945 Virginia May Oberg married Amede Louis D'Hooge in Chicago, IL while he was on leave with the US Navy. After the war ended the couple lived in Tennessee and Seattle before making their home in Havre; where they raised their 4 children.

Virginia was a disciplined and faithful woman. She spent her time caring for her family and volunteering in the classrooms at St. Jude as well as with Boy Scouts, Girl Scouts and 4-H over the years. She was a member of the Catholic Daughters and "The God Squad". She dearly loved her friends from the Havre and Hi-line communities. New and longtime residents at the Eagles Manor became her friends quickly. They supported her during her retirement and welcomed her stories, clichés and of course advise. Before retiring there, she enjoyed fishing and camping in Beaver Creek, Glacier and Canada. You could always count on her to root for the underdog. The Mariners were her favorite team. She knew the players' stats and would often times call her sister to discuss the games. Virginia dearly loved her children, grandchildren and many nephews and nieces. Her love and affection will be greatly missed by many.

Virginia was preceded in death by her parents; husband; and brothers, Russell and Sterling.