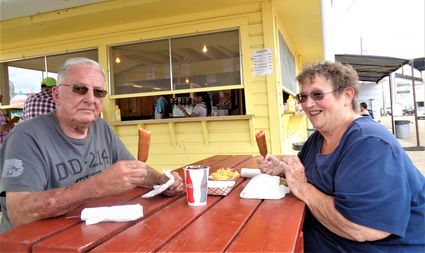 Bob and Deanna Berg enjoy a couple of pronto pups at the Chinook Lions food booth during the recent Blaine County Fair. The Bergs said, "We came to the fair just to enjoy a pronto pup. During the upcoming Hill County Fair we'll have a pronto pup every night." The Bergs live in Havre.

Recently I went back to Chinook to help in the Lions Club's pronto pup stand during the 2019 Blaine County Fair. I'm still a member of the club and proceeds from sales of pronto pups and cheesy fries support the community work of the club. They always need help during the fair.

Pronto pups are the Lions' variation of a corn dog. Someone asked, "Do you know about the hot dogs you are cooking?" I'm a relative newcomer to the area so didn't know the history of the iconic wiener so esteemed. I noticed the packs of unopened dogs are "distributed by the Rocky Mountain Packing Plant, Havre, Montana."

Asking around I learned that most anyone in their 40's or older knew the product well. But there seemed to be some confusion about where the famous hot dogs are made and where they can be purchased. There were even a few folks who believed the hot dogs no longer have a connection to Havre. I decided to educate myself about Rocky Mountain hot dogs. This is some of what I learned.

Art Kleinjan, a resident of Chinook and former trucker who hauled livestock to the packing plant, described the hot dogs as "the best wieners we ever had in this part of the country." Another senior from rural Blaine County recalled supplying beef to the packing plant formerly on US Highway 2 in Havre. Many 40-50 year-olds remembered going to the meat shop and being given a hot dog to munch while their parents shopped.

Mike and Paulette Keller, who ranch in the Bear Paws, told that when they took their kids to Havre a must stop on the way home was for a hot dog at the Dairy Queen. Mike said, "At that time they served Rocky Mountain hot dogs. Later, on a vacation we stopped at a Dairy Queen in another town and when they kids bit into the hot dogs they whined, "These are not like the ones we get in Havre."" One of those kids, now with her own family, said, "when I would leave home to go back to college I always made sure I had a supply of Rocky Mountain hot dogs to take to school."

Jeff Finley, who owns Finley's Food Farm (grocery store) in Chinook, explained he ordered 45 cases of Rocky Mountain hot dogs for the recent county fair and Chinook High School's all class reunion that is stage every five years. He said, "That was the hot dogs for the Lions food booth plus packages that were bought by Chinook High alumni who came back for the reunion."

Thousands of hot dogs have gone in to pronto pups sold by Lions Clubs along the Hi-line. Bob Matson, a former Lion in Chester told, "It's a fact that Rocky Mountain hot dogs have less water than other brands, they don't 'explode' when you ease them in to the hot oil to cook." Jay Eslick, a Chinook Lion, believes the skinless Havre-made hot dogs hold the batter best. Havre Lion Club member Bob Patera gave an estimate that the Chinook and Havre clubs jointly sell "about 10,000 pronto pups" during the two fairs. Pronto pup sales help Lions Clubs help their communities.

A short history of the Rocky Mountain Hot Dog

Aaron Swallow went to work for the packing plant in 1949. David Swallow, current owner and Aaron's son, is uncertain about when the original building was erected. The old building was the Havre Brewery until prohibition started in 1920. The brick slaughter house was built during 1953-54. When Aaron Swallow started working the plant processed only pork and years later added beef.

Over the years the plant produced cut meat and lunch meats, butchered and processed livestock for private use and processed game brought in by local hunters. It was in the late 1940's when German sausage makers employed by the plant created the hot dog that is still a favorite.

In 2003 the Swallow family closed the physical operation because "it was becoming too expensive to maintain and operate the building." David Swallow found a 'co-packer' in Colorado who would produce hot dogs using the original recipe that the family still retains. A few years later Swallow switched to a packer in Idaho "recommended by one of our larger clients." 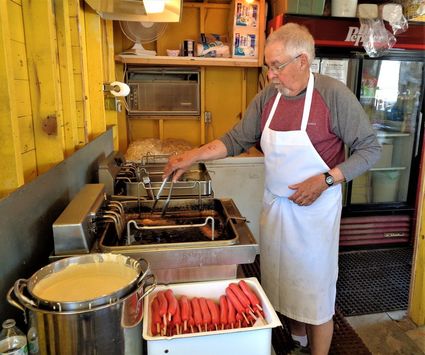 Swallow provides the spices to the packer who produces the hot dogs. Some finished hot dogs go to a large warehouse serving chain stores throughout Montana and others go directly to Havre where the Swallow family distributes them to smaller outlets as requested. Locally Rocky Mountain hot dogs are available at grocery stores in Havre, Chinook, Chester, Big Sandy, Rocky Boy, Harlem and Malta.

David Swallow said, "I started as a nine year-old kid helping around the packing plant." After college he was a Board Certified Steam Plant Inspector, working across the western part of the U.S. He came back to help his father manage the plant in the early 1990's. Approaching 80 years of age,David is very much involved in the business along with his wife and daughter.

After 70+ years the Rocky Mountain hot dog is still in demand. Visitors back to the area often stock up on a supply of the iconic hot dog to take home. I asked David Swallow "how many hot dogs do you figure you've seen produced?" He thought a minute and said, "A lot."