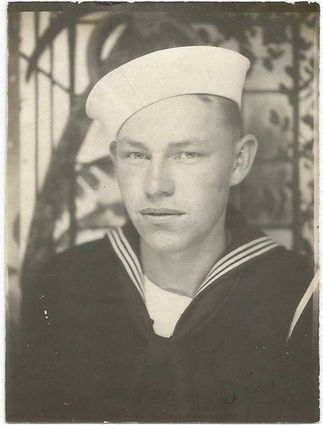 It is with great sadness that the family of William E. Hay is announcing his passing on July 25, 2019. A service will be held on Wednesday, July 31st at 11:00 AM at Fifth Avenue Christian Church in Havre, Mt. A burial service will be on Aug. 1, at 11:00 AM, at the Harlem Cemetery.

Bill was born March 3, 1926 to Daniel and Edna Hay in Savoy, Mt. He graduated from Harlem High School in 1944. He joined the Navy in 1944 and served in active duty until 1946. His service included working in Hawaii to rebuild Ford Field after the bombing of Pearl Harbor. Then he was a reserve from 1946 to 1952. On June 7, 1947, he married Betty LaFountain in Havre, Mt. They made their home in Harlem for the next 65 years where they raised their 5 children. Bill worked at various jobs from teen days on farms, railroad and gas stations. He began his career at Harlem Motor Co which later became Olson Ford where he worked for 38 years and then bought the Grand Theatre (1976 to 1995) and worked there evenings after working at Olson Ford during the day. Bill continued running the theatre after his retirement from Olson Ford.

Over the years Bill enjoyed stock car racing, camping, hunting, fishing, bowling, country music, casinos and bingo. In later years, he would enter his bread machine bread in the Harlem Seed Show where he won many ribbons. He also enjoyed watching wrestling, boxing and rodeo on tv. He belonged to the VFW in Harlem and was in several leadership positions.

In 2012, he and Betty moved to Buffalo Court Apartments in Havre where he enjoyed potlucks and playing bingo. He met new friends here and was adopted as Dad to some of the ladies that played at bingo. While living in Havre and before he went to the Care Center, he enjoyed church at Fifth Avenue Christian Church.

In August of 2017, Bill moved to the Northern Montana Care Center. The nurse and CNA care there was excellent. Even to the end of his life, they were compassionate, loving and caring.

Bill will be lovingly remembered by his wife, Betty of 72 years, his 5 children, Nancy Mahns (Russ Muller), Butch Hay (Lisa), Charlie Hay(Susie), Carol Klindworth (Duane) and Tom Hay (Kim). He had 15 grandchildren, 31 great grandchildren and 4 great, great grandchildren. He will also be remembered by his brother, Richard (Dick) Hay. And many nieces and nephews. He was predeceased by his parents, Dan and Edna Hay and siblings, Mary Belle Liese, Jean Neely, Blaine Hay, Alice Miller, Ethel Birdwell and Gloria Miller, And grandsons, Will Hay and Daniel Hay and son-in-law, Karl Mahns.

In lieu of flowers ,memorial donations may be made to Veterans of Foreign Wars of the US.