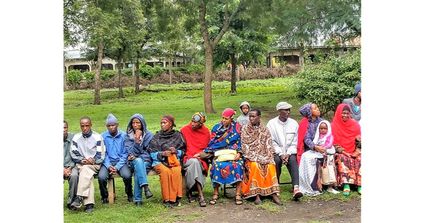 Patients waiting to get into one of the clinics in Tanzania.

After our very successful dinner and silent auction in April, the team began packing and preparing for this mission. We left on May 16th and arrived on the 17th. To say the least, it was a long journey. There were 15 members on the team including Peggy Perry and Arlys Williams (NP)from Chinook, Dr. Carly Robertson, Bev Hagen, Carole Crosby, Marilyn Granell from Havre, Diane Brown (RN), Patrick (PA) and Kathy Armstrong from Chester, Jan Driscoll from Stevensville, Tim (PT)and Mary Nielsen (RN), Rick (paramedic) and Mary Langlotz from Florence and Diane Grabenbauer (paramedic) from Orlando.

Once we arrived, Bishop Eludi Issangya, and some of his staff were there to meet us to transport us to Sakilla which is a small village about an hour away. It had really been raining and was still raining. The road up to the mountain village had deep ruts and was very slick. At one point, we thought we would need to get out of the bus and push. Luckily, we did not. It was late but food was waiting for us. Then time to unpack and settle into our houses. There is the Montana House, Wyoming House, New York House and California House. These were built for volunteers who have mainly come from these states. They were quite comfortable and included running water.

On Saturday, we went to Arusha, a city of about a half million people. Keep in mind it is a third world country and there was very little infrastructure. Our first stop was to exchange money. One hundred American dollars equaled $230,000 Tanzania Schillings. Then we stopped to purchase medications that would be needed at the village clinics. Next, we stopped and purchased fabric and then to the tailor to be measured for a custom-made garment. Finally, it was to the Masai Market to purchase souvenirs. Oh, were they hungry to sell us their items and lots and lots of bargaining. A fair price was usually half of what they initially asked for.

Each Sunday, we attended church with around 200 people. Many walked a long ways on muddy roads to attend. Our team sat on the stage with the church leaders. During the service we then introduced ourselves and it was translated to Swahili for the parishioners. It was quite a lively and joyful service with lots of singing and dancing. Surprisingly they had an excellent sound system. Most of the places have electricity but no running water. Offerings were taken and one older woman was given a live chicken. She was ever so grateful. After the service was over, people met and greeting each other on the lawn and the elders had coffee with our team.

During the week, it was clinic days. We visited three villages, Ngeku, Dolly, and Kikatiti for three days each with the former two not having had medical care on site before. Each day we loaded up the truck with plastic tubs full of medications and supplies for the day. We also road in the back of the truck. It was a bit like a cattle truck. There were a couple of benches to sit on but not enough for everyone to have a seat. Along with the 15 of us, we had 5 translators, 2 medical staff from the Sakilla Dispensary and Mama Chakula, our cook. There always seemed to more wanting to hitch a ride with us. The roads were incredibly rough and since it had rained a lot, they were very muddy. A blue tarp was put over the rack on the truck to keep us dry. One of the villages, was an hour and a half drive each way. Once we arrived, we would need to unload the truck and set up a make shift clinic in the church. There were already many people waiting to see us. We always had a coffee break and it would be very insulting if we did not come, same for lunch. They always cooked on an open fire. Our goal was to get back to our quarters by 5 but it was more like 5:30. Then again unload the truck and get ready for dinner which was always served at 6. Since it is located close to the equator, it gets dark about 6:15 and light at 6. We always needed to remember a light as we would be walking home in the dark after dinner.

The last Saturday, we went to the Orphanage in Arusha connected with the church. While we were there, we did well child checks, provided lunch and soda pop and each child got a bag of small gifts. The children sang and danced for us. It was very touching. The Valley Clovers 4-H club in Chinook gave a monetary donation to this mission. With that money, 700 pounds of beans and rice were purchased for the orphanage. It is especially critical now, as the crops failed this year due to a drought. Sadly, there will be many hungry people.

We raised an amazing $12,000 at our From the Heart of Montana to the Hearts of Tanzania, fund raiser in Havre and were given other monetary gifts for our mission. This was by far the most money any team had ever taken to Tanzania.

Our team was able to see nearly 1000 patients. Money was used for: 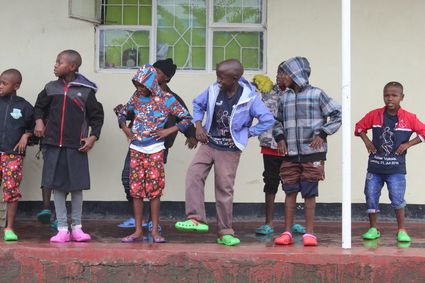 88 dental referrals, 71 consults to specialty physicians, 7 urgent cares where we sent patients immediately to the hospital for injuries or severe sickness, provided 4 diabetics and others with 6 months of medications, a prosthesis for a young man who lost his leg after it was crushed between 2 trucks, 8 minor surgeries, 5 referrals were made to the Plaster House. This is a children's hospital and rehab center for orthopedic type surgeries. An amazing place supported by Lutheran churches, testing of mammograms, blood work, CT scans, etc. for 43 people, rice and beans for 7 families plus the 700 pounds for the orphanage, a special refrigerator for the clinic for storing immunizations, completing the plumbing in the clinic lab with water to the bathroom and shower, 19 surgeries including 5 adenoid - tonsillectomies for young children. There were also others such partial mastectomy for breast cancer, bronchial cyst, several other cancer surgeries, and urinary surgeries, supply of medications and needed items throughout our time.

In 2021, it is our goal to take two teams. Planning will begin in February and will have our fundraiser again in April. If you are interested in being a part of the 2021 team, please contact Peggy Perry 357-3324.