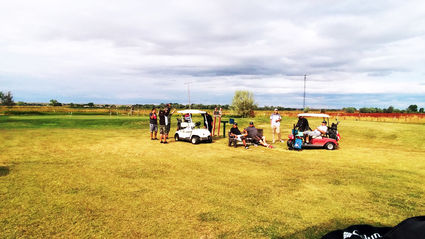 After playing 18 hole in the Richman Insurance/EZ Mart Golf Tournament players relaxed and talk about their round while enjoying cold refreshments and hot pizza.

The Harlem Golf Course played host for the Richman Insurance/EZ-Mart Golf Tournament this past Saturday.

Thirteen teams made up the field with four people per team. Playing in a scramble format, the tournament began with registration at 9:00 a.m. followed by a Calcutta, with teams teeing off at 10:00 a.m.

A 'Scramble' is played with all four players hitting from the same spot, the team will then choose the ball they would like to play next and everyone will hit from there. The order players hit in is random each shot, including putting on the green.

Tournament rules required each team to u...