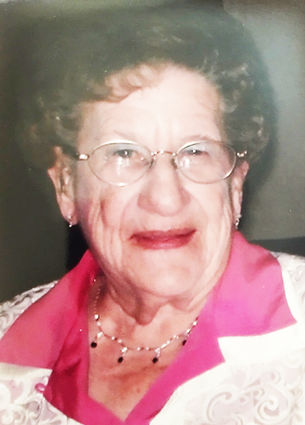 Fern (Bosch) Holmes was born on October 22, 1929 in Zurich, MT to Julius and Ella (Friede) Bosch, and passed away August 17, 2019 in Havre, MT surrounded by her loving family. Fern grew up on the family farm south-east of Chinook attending Snake Butte School through the 8th grade, graduating from Chinook High School in 1948. She worked in the Blaine County Clerk and Recorders office upon graduation, and later worked at Chinook High School as secretary to the superintendent.

Fern Married Robert (Bob) Holmes on October 11, 1953. They were blessed with three children: Lynda, Nancy, and David. Together Bob and Fern opened Bob's Drapery and Floor Covering in 1961, which they owned and operated until retiring in 1993.

Fern enjoyed bowling, dancing, crossword puzzles, reading, watching Jeopardy, sewing, embroidery, baking, hosting delicious holiday meals for her family, and anything relating to flowers. She helped out at Paradise Valley Greenhouse for her "dirt therapy," and at Milam Floral for her dear friend Lynette Friede. Fern and Bob spent countless hours tending to their yard, achieving "Yard of the Week" several times.

Mom, Gma (as she was affectionately called by her grandchildren), Oma or Omo to her great-grands, was an amazing blessing to all, and will be greatly missed.

Fern's celebration of life was held on Saturday August 24, 2019 at the American Lutheran Church in Chinook at 11:00AM, with a luncheon following in the church basement.