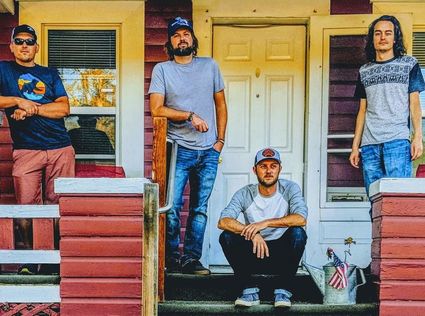 Musical guests, Matt Strachan and The Hoot Owls will play Saturday night, September 14 at the Sugarbeet Festival Street Dance in front of the Mint Bar and Eagles in downtown Chinook. Members of the band are Cody Davis, Paul Brantley, Matt Strachan, and Brian Luehr.

Next Saturday, September 14, Chinook will be honoring a piece of its history with the annual Sugarbeet Festival. This year's Sugarbeet Festival theme is Celebrating the Rural Family, and the event promises food and fun for everyone.

"We wanted to keep the celebration simple," event organizer and Chinook Chamber of Commerce President, Daniel Dahl said. "We know how busy everyone is and how valuable time is, but small businesses are the staple of our community, so come on out, get involved, and thank our area businesses by shopping locally."

Although the Sugarbeet Festival supports local businesses by bringing people to town, it also gives other vendors exposure. Vendors will be coming to Chinook from across the Hi-Line with their foods, crafts, and other wares. Two of the featured food vendors this year will be food trucks: Streatery and Side Hustle.

Owner of the Streatery, Sarah Manuel leases her 1967 Ford Boyertown truck from Michael and Erin Garrity, the owners of Triple Dog Brewing in Havre. Although Manuel typically serves diners out of the brewery's parking lot, she moves her truck to various venues and is a regular at the Saturday Market in Havre's Town Square. According to Manuel, "Farmer Meets Foodie is our slogan because I thought it was the simplest way to explain what is important to us. Quite literally, the farmers meet the foodies because the bulk of our ingredients are sourced directly from local farmers and ranchers. Our customers should know where their food is coming from, so we make a point to tell them."

As a producer and a foodie, Manuel wants to connect people to the food that's grown and raised in their communities by hard-working men and women who dedicate their lives to stewarding the land and producing quality ingredients.

Coming from the east, Side Hustle is a food truck business owned by Carrie Simonson and Mary Oxarart that has been operating out of Malta since May 2019. Famous for serving the only "conewich" in Montana, Side Hustle drew the attention of Chinook's Chamber President when he ate one of their conewiches, soft cone-shaped bread filled with a variety of fixings. Although Side Hustle serves Pizza Cones, Chicken Alfredo Cones, and conewiches filled with barbecued pork, brisket, bacon mac and cheese, and so much more, their Sugarbeet Festival menu will include pulled pork nachos and the original Hustler Conewich, which features pulled pork, beans, and coleslaw.

"Our third menu item will be weather dependent," Oxarart explained. "If it's cooler, we'll serve white chicken chili, and if it's warmer, we'll serve street tacos."

In addition to serving at outdoor events like the Sugarbeet Festival, the Side Hustle often attends county fairs. "We also provide service to the patrons of Blue Ridge Brewing whenever they invite us," Oxarart reported.

The Festival will begin at 8:00 on Saturday morning with the staff and management of Dan's Auto Parts serving a Pancake Breakfast at the Senior Citizen's Center, located at 324 Pennsylvania Street. Following breakfast, festival attendees can shop the various vendors on Indiana Street, visit one of the inflatables, decorate a sugarbeet, or participate in one of several additional events: the Jesse James Foundation's Amazing Color Run or Walk, a 3 on 3 basketball competition, a pie eating contest, or First Bank of Montana's Ping Pong Drop. And that short list just scratches the surface of scheduled events.

Branch President for First Bank of Montana in Chinook, Jessica Aberg described seeing a ping pong drop in another town and thought this would be something new and different to bring to Chinook.

"So, this year's drop will operate on trial and error, and if all goes well, we'll do it again," Ahberg said.

Because safety is a number one concern, the crowd will be split into several smaller groups by age. For the adult and older youth groups, the ping pong ball drop will occur from the roof of the First Bank building onto Indiana Street. For the younger groups, Aberg has asked Perry Miller with Miller Brothers Tree Service about using one of the company's bucket trucks to drop the balls onto the grass in Inman Park, the pocket park located at 327 Indiana Street and situated beside the HUB International/Inman Insurance building.

According to Aberg, when the ping pong balls hit the ground, the people gathered will make a mad dash to grab as many as they can and take them to the prize table where they can redeem them for toys, ice cream coupons from The Creamery, and other prizes valued under five dollars.

The parade is another signature Sugarbeet Festival occurrence. Dahl encourages people to assemble an entry: "Want to flaunt what you've got? Why not enter in the parade? If you are a planner, you can fill out one of the available entry forms and send it to me, or you can bring it the day of the parade," he said.

With two clubs hosting events at the Blaine County Fairgrounds and with the Blaine County Library's "funtivities," all areas of the town will be getting involved. The Chinook Rod and Gun Club's Gun Show will be continuing on Saturday from 9:00 a.m. – 6:00 p.m., and while the gun show is taking place in the Commercial Building at the fairgrounds, the Blaine County Cruisers (BCC) Car Show will occupy the grass near that building.

Anyone wishing to display their vehicle should plan to arrive at 300 Cleveland Road West in Chinook between 9:00 a.m. – 3:00 p.m. The BCC will be awarding trophies for Best Mopar, GM, Ford, pickup, and other; Best of Show; and People's Choice at approximately 2:30 p.m. According to Matt Langford with the BCC, that awards agenda will enable the drivers to get their cars ready for parade line-up if they choose to participate. A parade of cars will join the Sugarbeet Festival parade, with line up occurring at approximately 3:30.

Following the parade, the BCC will be hosting a horseshoe tournament at the fairgrounds. Teams will pay an entry fee, and the top two teams will receive prize money. Because the tournament will be limited to the first 16 teams that call to register their team, interested persons are encouraged to call Loren Skoyen early to indicate their desire to compete. Skoyen can be reached at 406-781-8033

Furthermore, the Wildlife Museum will be open from 10:00 a.m. until 5:00 p.m. for people to explore, and the Blaine County Library will host a series of fun activities from noon until 3:00 p.m. These "funtivities" will include corn hole, a water table for the younger children, a baby pool filled with sand and buckets, and a book sale.

"Many of these activities will be weather dependent since the library itself will not be open, although we'll have access to the foyer for the book sale," Library Director, Valerie Frank explained. "We'll also have a station where people can take Rocket Photos with our rocket constructed during the summer reading program, A Universe of Stories."

As the day winds down, hardy Festival-goers are invited to dance the night away with Matt Strachan and the Hoot Owls, a country/alternative rock band based out of Helena. Sponsored by the Chinook Chamber of Commerce, the Mint Bar, and the Chinook Eagles Club, Matt Strachan and The Hoot Owls will play in the street between the Eagles and the Mint. Comprised of Matt Strachan on lead guitar and vocals, Cody Davis on drums, Paul Brantley on bass, and Brian Leuhr on electric guitar, the band is known for its high-energy performances. One of their songs, "Caddisfly" from the album Dogtown celebrates fishing in Montana and places the singer knows like the back of his hand:

Out there in the middle of Montana

on the other side of the mountain pass,

when the caddisflies hatch.

On that note, anyone with Sugarbeet Festival-related questions is encouraged to contact Dahl at 406-399-3055. A full schedule of Festival events will follow in next week's issue of the newspaper.