The Hays/Lodge Pole Thunderbird football team anxiously awaits the start of their season opener Friday night in Rocky Boy. The Thunderbirds won the contest 52-26 to start the season 1-0.

The Hays/Lodge Pole Thunderbirds are a young inexperienced team when it comes to varsity football. Head Coach Josh Werk and new Assistant Coach Jerry Racine have given the kids the opportunity to change the culture of the program at Hays/Lodge Pole High School.

The team hosted a camp, attended another, and put plenty of time in the weight room hoping to bring a new mindset to the field when the season got underway.

That opportunity came this past Friday night under the lights in Rocky Boy. The Thunderbirds struck first on a five yard run from sophomore Tyshawn Shambo. Hays/Lodge Pole would add the conversion attempt to take an early 8-0 lead.

Rocky Boy would have a response though, scoring the next two touchdowns of the contest to take a 12-8 lead over the Thunderbirds heading into the second quarter.

Sophomore Estevan Granados would give the visitors back the lead following a 35 yard touchdown reception from sophomore quarterback Deshawn Shambo. After another successful conversion run the Thunderbirds held a 16-12 lead over the Stars. Rocky Boy put up the final points of the half and would enter intermission with a 20-16 advantage over the Thunderbirds.

What a difference the adjustment made to the Thunderbird rushing attack. Deshawn completed 6-11 passes for 75 yards and a score in the first half but following the change the Thunderbirds were strictly a running team.

Henry got the offense started with a 65 yard touchdown run to give the Thunderbirds the lead back 24-20. Deshawn followed a defensive stop with a 35 yard scamper of his own and after the T-Birds fourth conversion of the day, Hays/Lodge Pole had a 32-20 lead.

The Stars added a touchdown but the Thunderbird defense would not give them anything the rest of the contest. Henry scored again on another long run, this one from 60 yards out. The defense gave the offense the ball back after a diving interception by junior Wyman Bringinggood and Henry again answered the call with a 20 yard score to put H/LP on top 46-26.

Senior Mikkel Main closed out the scoring for the Thunderbirds with a strip sack touchdown from his defensive line position. The Thunderbirds missed the conversion attempt but put the finishing touches on a 52-26 season opening win over the Rock Boy Stars.

Henry finished the game with eight rushes for 176 yards and three touchdowns, all in the second half. Deshawn, 12 rushes and 147 yards and a score to his 75 yards passing. The Thunderbirds tallied 396 yards rushing in the contest.

The Chinook Sugarbeeters opened their 2019 football season at home against the Southern C Park City Panthers in an afternoon contest. The 'Beeters struggled to finish drives and had some breakdowns defensively in a tough season opener, but they also showed some signs of good things to come and for the most part were able to compete with the visitors from the south.

Chinook controlled the clock for much of the first half, using a solid combination of run and pass. Senior Sam Dumas ran the ball well and junior quarterback Benton Elliot showed a live accurate arm during the 'Beeter possessions. 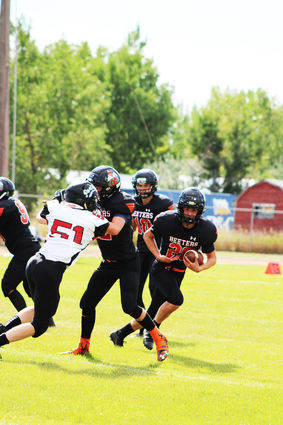 The 'Beeters saw a number of drives come to an end following correctable mistakes', bad snap, wrong route, but the potential was evident. The Panthers didn't pick up a first down until late in the half but led 32-0 due in large part to four long, 60 yard plus run and pass plays.

The 'Beeters got on the board late in the second quarter when Elliot hit sophomore Toby Niederegger in stride for a 36 yard scoring strike. Th Panthers returned the ensuing kickoff 71 yards to push the lead to 40-8 at the half.

Dumas took a hand off from Elliot and hit Niederegger for a 20 yard touchdown and Elliot found Niederegger for a 41 yard scoring strike to round out the scoring for the 'Beeters in a 56-24 loss to Park City. Elliot finished 20-39 for 242 yards and two scores. Niederegger caught 11 balls for 134 yards and three touchdowns while Dumas rushed for 75 yards on 20 carries. Sophomore Drake Berreth recorded an interception and senior JT Hauer had two forced fumbles.