South of the Border: "Side trip to a ghost town: Garnet, Montana" 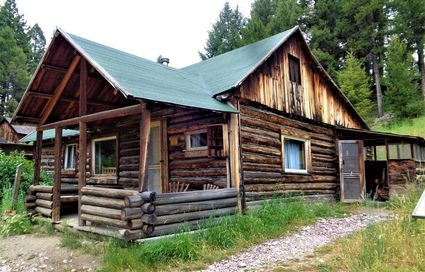 Ole and Marion Dahl built this cabin and a nearby saloon during a brief resurgence in mining in Garnet during the 1930's. Over time the Dahl's added a porch and kitchen to the cabin and a generator system to provide electricity to their saloon across the street. Marion lived in the cabin until 1960. The present Garnet Visitors' Center is located in the old saloon building.

Columnist's note: About 30 miles east of Missoula on MT Highway 200, while taking a couple of my grandsons back to the Seattle area, I saw the sign for the turnoff to 'Garnet Ghost Town.' I'd passed the turnoff many times. I told the kids, "Today we're going to the ghost town." 'Ghost town' got a positive response from the ten and twelve year old boys.

Established in 1895 Garnet became a ghost town in the late 1940's when it lost most of its population and businesses. Renovation and preservation efforts are now under management of the Bureau of Land Management with support from the Garnet P...