'Beeters, Thunderbirds, Wildcats all fall on the gridiron 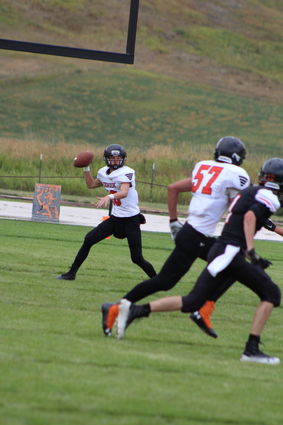 Benton Elliot looks for an open receiver during first half action in Centerville Saturday afternoon.

It was a tough week on the gridiron for the Chinook Sugarbeeters, Hays Lodge/Pole Thunderbirds and Harlem Wildcats as all three failed to find the win column. The Sugarbeeters play in the ever tough Northern C and their schedule to start the season is brutal by any standard. The 'Beeters were in Centerville on Saturday to take on the Miners and turned in a gritty performance, but fell short in a 48-32 loss. The Thunderbirds scored a pair of late touchdowns in a 70-12 loss to the Longhorns in Fort Benton. Harlem was also on the road, falling to the Poplar Indians 34-0 in their season opener....