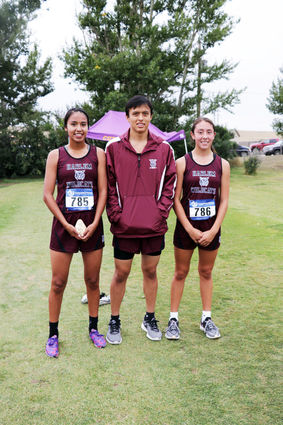 L-R: Harlem senior L'Tia Lawrence won the girls race in Cut Bank with a time of 19:02.62. Senior Brad Cichosz finished fifth on the boys side and sophomore Taya Trottier was eighth in the girls race.

The Harlem Wildcat Cross Country Team was in Cut Bank on Friday joining more than 300 runners at the Mike Reynolds Time Trials.

Head coach, Hope Doney, has been very pleased with the performance of her team and is excited to see what her top runners can do this fall.

Senior L'Tia Lawrence has ran very well in the fall and the spring for Harlem, earning All-State awards in both seasons. Friday in Cut Bank Lawrence won her second race of the season.

Lawrence has made a habit of winning her races by large margins, but this one was much closer as her time of 19:02.62 was only 21 seconds better...