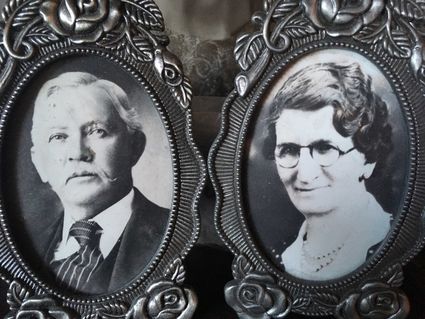 B.F. (Benjamin Franklin) O'Neal and Lena Marsh (pictured here) married in 1902. Both were natives of Michigan and migrated to Montana in the early 1880's where they met. B.F. and Lena's father, M.F. Marsh, bought and operated the Montana Hotel in Chinook for nearly 25 years.

Columnist's note: Alert readers may recall the June, 2016 "Journal" story about the Fred Robinson Bridge and its dedication in 1959. The giant celebration drew an estimated 10,00-15,000 celebrants.

At the end of 2016 story I wrote, "Here's one interesting but somewhat mysterious connection between the bridge and Blaine County. Both the "Harlem News" and the "Chinook Opinion" reported, "The first person to walk across the bridge after the log was cut (like a ribbon cutting) and the bridge officially opened, was Mrs. Lena O'Neal, long-time resident of Chinook."