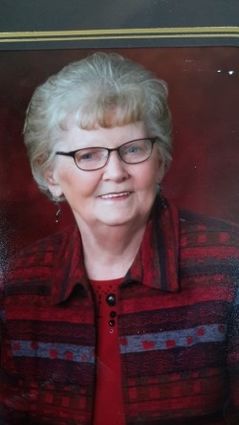 Virginia Lee (Lundberg)McCracken, 88, passed away peacefully, with loved ones by her side, September 12, 2019, at Northern Montana Hospital in Havre, MT from an abdominal aneurysm.

Virginia was born in Hogeland, Montana on May 4, 1931, one of four children born to Mabel and Melvin Lundberg. She graduated from Turner High School in 1949, continued her education at Northern Montana College in Havre, graduating with a teaching degree in 1951. She taught in Great Falls and later in Turner. She married Lynn Alden (Aldy) McCracken December 27, 1953.

After Aldy completed his term in the military, they settled on the family farm west of Turner, where their family grew by five. During these early years, Virginia was a charter member of the Modern Mrs. Homemakers Club, and active member of the American Lutheran Church and WELCA in Turner. She worked as the Turner School District clerk beginning in 1961, working from home.

In 1969, at the young age of 38, she was widowed, but remained on the farm, working and focusing her heart on raising her family. She was one of the first employees to work for Joe DeSaye at the J&G Rifle Ranch north of Turner, where she worked until the District clerk job became full time.

She continued employment at Turner Schools, retiring with 20 years of service in June of 1981. At this time, she had fulfilled the task of raising her kids and seeing them all thru High School. What a great time to retire, slow down, enjoy life! That's what we all thought, instead, she announced, at the age of 50, "I'm going to buy the grocery store". And....she did. She, and her son Doug, managed and operated McCracken's Grocery Shoppe until 1996.

The store sold, and once again, the word "retire" was discussed. Virginia was an avid quilter, and very involved with the Nimble Thimble Quilt Guild. She loved her flowers and garden, which led her to her next adventure. Patty's Hi-Line Greenhouse, owned by Patty Simons, was opened during the summer months in Havre, MT. Virginia would live in an apartment during the summer months and work in the greenhouse. Her love for flowers and people made this more of a hobby than a job.

Virginia was never a stranger for any longer than it took to smile and say Hello. She always seen the glass half full, believed in family and God. She lived her faith. She suffered from complications of surgery in 2017, which placed her in a long term care facility in Great Falls for a few months. Her will to go home allowed her to heal to a level where she could live with assistance.

She later moved to Timber Creek Assisted Living in Havre, Montana, where she resided at the time of her passing. She was loved as dearly by those she made her family at Timber Creek, as she loved them. She made all 88 years of her life full; full of love, faith and family.

She has also left her special friend, James (Jim) Reed who resides at Timber Creek in Havre, MT. Virginia was preceded in death by her parents, Mabel and Melvin Lundberg; husband, Lynn Alden McCracken; brothers Mel Lundberg and Wilford Lundberg. Brother-in-law Brice (Swede) Cederberg, great granddaughter Katelyn McDunn. She was a loving mother, grandmother, and friend. Her life and heart was full; ours are now only filled with memories.

Funeral Service Wednesday September 18, 2019 11:00am at the Turner Lutheran church, in Turner MT. The graveside and a Luncheon will follow the service.