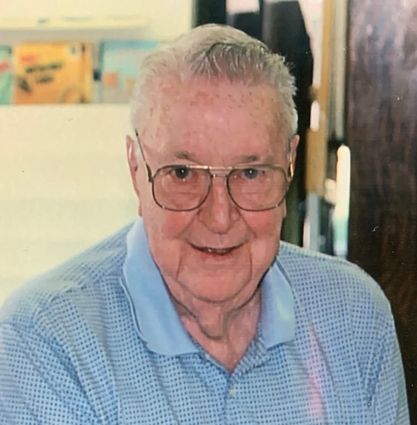 Ernest Sheldon "Ternie" Taylor, 92, passed away with his family by his side on October 13, 2019, at RiverStone Hospice Home in Billings, MT. Ternie was born to Katie and Sheldon Taylor in Fulton, Kansas on January 17, 1927.

Ternie was raised in Fulton and graduated with the class of 1944. He soon enlisted in the United States Navy and proudly served until the end of WWII. Upon returning from the service he stopped in Chinook, Montana to visit his father but was quickly sidetracked by his future bride, Margaret O'Brien. They were joined in holy matrimony on April 3, 1948.

As the story goes this wasn't the day Ternie wanted to wed, as Margaret wouldn't go along with his original plan to marry on April Fool's Day, so they compromised for April 3rd. Born to this union were five children; Margaret Mary, David, Michael, Leanne, and Mark. Ternie started his career in the auto industry by joining his father in the family business, Taylor Motor Company in Chinook.

This partnership continued for 35 years before he sold the business and eventually went on to start Taylor Homes with his brother Bob. During this time he remained an active volunteer firefighter and an Eagles member.

After these adventures he wrapped up his career as the General Manager of Havre Ford. In 1959 they built the family home that hosted 50 years of special occasions, holidays, and team gatherings. Ternie and Margaret moved to Billings in 2007 to live at Sweetwater Retirement. Sweetwater quickly became their new home where they made many friends and enjoyed sharing all life's stories.

Ternie's social activities continued even after losing his wife of 62 years in 2010. While working at Taylor Motors, Ternie would spend his lunch hours doing one of his favorite past times, playing cards.

This hobby became a family tradition as he would always spend time playing poker, pinochle, and even Aggravation with his children, grandchildren, and eventually great-grandchildren. It wouldn't have been a good game of cards if you didn't get a playful ribbing from Ternie. He was even known to toss a deck of cards in the trash if they weren't bringing him good luck.

Ternie was a proud Veteran through and through. In the spring of 2014 he was able to complete a bucket list item, making the World War II Honor Flight. You could also catch Ternie boasting about his grandchildren and great grandchildren, they filled his life with such joy.

Cremation has taken place and graveside service will be held in Chinook on November 29th at 12:00pm at Kuper Memorial Cemetery. A memorial was held on Tuesday October 22nd at 3:00pm at Sweetwater Retirement Community. Funeral arrangements were entrusted to Wilderness Funeral Homes. .