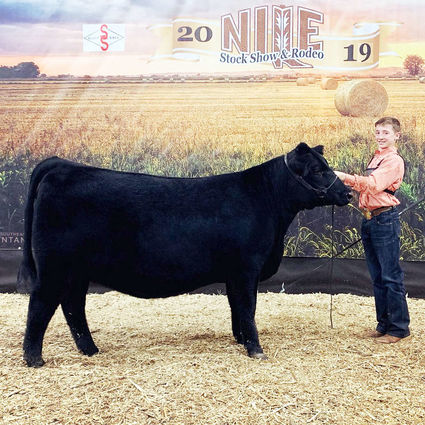 Wylee Simenson poses with Everlee, the heifer with whom he won Grand Champion Junior Showman. Everlee was also named the Reserve Champion Angus Futurity Female at the NILE.

Several area youth participated in the Northern International Livestock Exposition (NILE), which took place at the MetraPark in Billings on October 12-19. Wylee Simenson, Cody Arnold, Alyssa Gruszie, Madilyn Gruszie, Kenneth Gruszie, and Morgan Friede all came away with awards. Others attended and brought home memorable experiences. Although the Chinook Chapter of the FFA competed, they had no note-worthy placings, according to their advisor, Robin Allen.

Besides being billed as a stock show and rodeo, the week-long event features various competitions and events. One of the highlights of NILE is watching the Junior Breed Shows. These shows are only open to youth within specific breeds that are in good standing and membership with the breed they are exhibiting. For example, breeds from Junior Angus and Junior Red Angus take to the show ring throughout the week for judging.

After laboring for months to raise an animal and working with it in the ring, these youth spend several weeks preparing their animals for exhibition. As these top competitors from the region vie for the judge's eye, they undergo intense scrutiny. Wylee Simenson held up under the pressure to win Grand Champion Junior Showman with his heifer Everlee. Everlee was also named the Reserve Champion Angus Futurity Female in competition on Friday evening, October 18.

According to Wylee's mother, Tomi, "We are super thankful to everyone that helped make this girl look top notch! We love this heifer, and we are very excited for Everlee's future and what she will produce for us." The Simensons purchased Everlee from JL Farms in Billings.

In addition to Everlee's status after the Grand Drive of the Futurity Show, Wylee had another heifer make the Grand Drive. Madyson also won her class, giving Simenson a second heifer in the big show, but she didn't go on to take one of the top two prizes. By adding these achievements to his record, Simenson is gaining a reputation and setting a trend on the competition trail.

Although Simenson's younger brother Wacee did not make the Grand Drive with either of his heifers, he did receive compliments about his show skills.

"This past week was one for the books. There were times we would've loved to have done better competition-wise, but we're still very happy with the wins we brought home," Simenson's mother said. "I'm super proud of both of the boys. We also sold our first heifer in the Futurity sale to a great young lady that I think will do well with her. We learned a lot, met some great people, and enjoyed our time with all those who helped us get to the banner. We are already making plans for next year and are super excited for the show season to come around again!"

NILE isn't just show and breeding cattle, though; it features market animals as well. In fact, breeders exhibitors, and consignors all gather to show off their very best animals. As a participant in the Montana Registered Angus Association Steer Series (MRASS), Cody Arnold won Reserve Champion status for his market steer, Fred. To accompany his award, Arnold won a belt buckle, a coat, and a cash prize.

To qualify for the award, from April-October, Arnold had to compete in several state or regional level shows to earn show points. At year's end, he was required to submit carcass data, which was evaluated by the Certified Angus Beef division. Points accumulated from this show ring presence and the carcass contest combine to determine an overall winner. Participants must also be members of the Montana Junior Angus Association.

Arnold's steer, purchased from Top Notch Angus-which is owned and operated by Marvin and Patty Cross from Chinook-had earned Grand Champion status at the Blaine County Fair this past summer.

As stated by Arnold's mother, Rhonda, "Working with his show animals is Cody's sport of choice. He loves the work, and it takes long, hard hours and a dedicated feed schedule to win. When you put the work in, you reap rewards; it doesn't just happen."

A junior at Chinook High School, Arnold was bested by Nicole Stevenson from the Basin Angus Ranch in Joliet, a name that appears often in Angus show results. Competitors came from across Montana as well as from other states in the northwest region.

In other competition, Kenneth and Madilyn Gruszie both entered February bull calves. Competing against one another, Kenneth placed second with his calf named Max, while Madilyn and Jack placed fourth in that class. Kenneth also exhibited a January heifer calf, which he named Ruby, and placed third with her.

The Montana Red Angus Association awarded belt buckles to Alyssa Gruszie and her brother Kenneth for their Grand and Reserve Champion placings at the 2019 Blaine County Fair in the Breeding and Market Animal categories.

In the words of Trisha Gruszie, NILE is a family affair, "Alyssa doesn't enjoy being in the show ring but loves to wash and fit the cattle, so everything works out well. At NILE, she helped her siblings as well as the Simensons."

In a process not unlike applying for a live animal scholarship, Chinook FFA member, Morgan Friede completed an application in June for the NILE Merit Heifer Program and was recognized as a winner at the NILE Stock Show. She was chosen on the basis of merit, as well as on her commitment to agriculture, future goals, and ability to care for the animal.

The purpose of the program is to help youth get a start in the beef cattle business by awarding heifer calves to project participants. Any youth who is between the ages of twelve and sixteen years of age as of June 28 of the given year and a 4-H or FFA member may enter. Entries are not limited to Montana, so Friede won in rigorous, northwest regional competition.

As a program participant, Friede will own her heifer jointly with NILE until the completion of the program, at which time NILE officials will sign off and Friede will take full ownership of the heifer, which is coming from Peterson Land and Cattle in Havre. During the program's duration, Friede will be responsible for raising the heifer, arranging for her breeding, completing the record keeping procedure, and bringing the animal back next year as a bred replacement heifer for exhibit at the NILE Stock Show.

The program is completed after the heifer is determined bred, all record keeping has been completed and the heifer has been shown at the NILE Stock Show. Because the purpose of this program is to help the participant start his or her own cattle herd, Friede will not sell her heifer at NILE,

In other FFA involvement at NILE, the Chinook Chapter took a Sales Team and had one competitor in livestock judging.

On Monday, October 14, Jase Pursley, Saige Olmsted, Ben LaVelle, and Kurtis Hamilton competed in the Sales and Service contest, which gives competitors an opportunity to practice selling a product or service. In addition to developing an understanding of the opportunities available in the ag sales industry, this contest teaches communication skills, persuasive techniques, and negotiation methods. These skills can help FFA members with future careers and daily business tasks. Judges role play as customers for the students to sell the designated item of the day.

According to their advisor, Robin Allen, the Chinook team represented Bayer, selling fungicide, herbicide, insecticide, and growth regulator solutions for turf. "Their focus was more on golf courses, lawn and landscape professionals, nursery, and greenhouse growers," Allen said. "Living in Chinook, that topic is somewhat beyond the students' knowledge base, but they're learning a lot."

Chinook FFA member Rielly Weigand also competed on Monday as a livestock evaluator. The Livestock Judging Contest is a process of evaluating, selecting, placing, and learning the various livestock species–beef cattle, sheep, and swine. It is important to learn how to compare the merits of one animal against the merits of another and how they relate to the ideal species conformation. Livestock producers, breeders, feeders, buyers, and packers evaluate livestock for their potential as either breeding or market animals. The ability to evaluate animals and then to explain the reasoning for doing so are acquired skills.

On Thursday, October 17, Bree Swanson, a freshman at Chinook High School, participated in the Gold Buckle Select Horse Futurity with her two-year old gelding, an animal which she purchased last year at NILE from Ron and Donna Burns. Swanson's mother Lori reported that "Bree's colt has been the most trainable, easy-going colt we've ever been around. Even though he behaves like an old broke horse, he's just a baby with 100 days under saddle."

Horses eligible to compete in the NILE Futurity must have gone through a NILE Gold Buckle Select Horse Sale. It's an added incentive to buy at the NILE because there's a chance to win some money the following year in the futurity. Because this was Swanson's first competition with her horse, Joe, she came in eleventh out of eighteen in her class. Although only the top six places pay prize money, based on the number of horses that compete on the day of the show, competitors have a chance at an estimated $20,000 total futurity purse. Swanson competed in Open Class since there isn't a youth only category. One other youth also competed in the Gold Buckle Select Horse Futurity, but the balance of Swanson's opponents were professionals who travel for competitions like this. 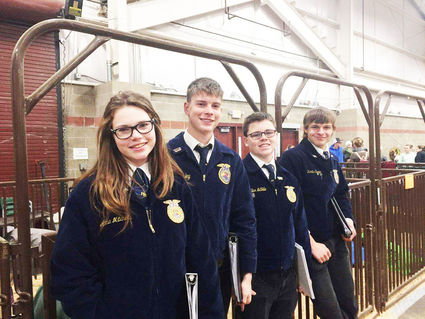 The Sales Team representing the Chinook Chapter of the FFA was comprised of Saige Olmsted, Jase Pursley, Ben LaVelle, and Kurtis Hamilton. The team competed in the Sales and Service Contest on October 14 in Billings at the NILE.

Because two-year-olds show in a trail class with reining elements, Swanson and Joe had to navigate a trail course with obstacles like logs, bridges, and gates. They also had to perform certain patterns.

Swanson's mother reported that while there were no big wins, the experience was memorable. "Bree had an excellent experience and she's ready to go back next year."

Swanson also described the humor of watching Rebecca Stroh, the reigning Miss Teen Rodeo Montana, wrestle JJ Harrison, a professional rodeo clown from Washington who performed at the NILE. The smack down took place in the arena on Saturday evening, October 19, after which Harrison posted to his Facebook page: "Got whipped by this Queenie/Wrestle Mania Monster." To Instagram, he shared under several tags: #queeniesgotmoves, #beastmode, #cowgirltough, and #dontmesswithmontana.

The NILE is a non-profit organization dedicated to preserving and embracing the western way of life through the promotion of livestock, youth education, and respect for the culture of western agriculture.