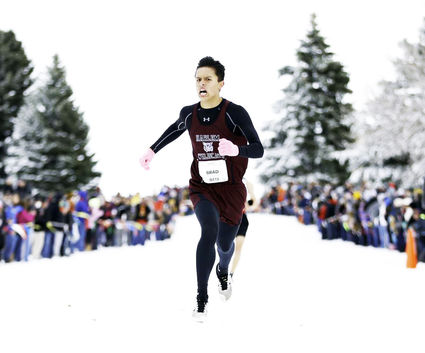 Harlem Wildcat senior Brad Cichosz didn't let a snow covered course at the Montana Class B State Cross Country Meet in Great Falls this past Saturday get in the way of his season long goal. In fact he embraced it, welcomed it as he went out and ran the race of his life en-route to capturing a State Championship that afternoon.

Cichosz was joined in Great Falls by several of his Wildcat teammates. The Harlem boys finished ninth overall as a team. The Harlem girls performed very well as well with senior L'Tia Lawrence finishing third to earn All-State honors.

The Hays Lodge Pole Thunderbirds had five runners on hand to compete in the State Class C Cross Country meet. The Thunderbird boys finished thirteenth overall and were led by junior Isaiah Denny and his 21st place finish.

Cichosz is competing in Cross Country for just the second time of his four years of high school. Cichosz turned in an outstanding season on the track this past spring and was looking to build on that momentum when the fall cross country season started.

Mission accomplished. Cichosz may have been in just his second season, but with the help of his head coach Hope Doney he found the front of the pack rather quickly. Cichosz credits Doney for pushing him, motivating him and encouraging him to be the best he can be, components that allowed him to achieve his ultimate goal.

Cichosz's first high school race came at the Great Falls Invitational on September 14 of 2018. His time, 19:20.5, good for a 19th place finish. Two weeks later at the Scottie Invitational in Glasgow he had already trimmed nearly two full minutes off his first performance.

He was learning to run the race quickly and efficiently. Unfortunately he suffered an injury during the basketball season that saw him miss most of his junior season. Cichosz never lost focus on his goals, maintained a strong work ethic and a will to get better.

When the high school track and field season began in the spring, Brad quickly established himself as one of the front runners in all of Class B in both the 1,600 and 3,200 Meter races. Cichosz finished eighth in the 1,600 at the Class B State Meet and fourth in the 3,200.

His success on the track in the spring and a dedicated off season put Cichosz in position to accomplish big things during his senior year of Cross Country for the Wildcats.

His first race this fall he won, claiming the title at the Wolf Point Invitational with a time of 17:44.40. A week later he knocked :57 off his time but finished fifth at the Mike Reynolds time trials in Cut Bank, crossing the finish line in 16:47.3.

Cichosz would race again 15 days later at the Poplar Invitational on September 21. Cichosz turned in the best time of his career. Cichosz took :33 seconds off his previous time to finish fourth. In the first three weeks of the season Cichosz had shown dramatic improvement.

As the season progressed, so did Cichosz. The only thing that seemed to not get better were the race conditions but Cichosz was dialed in and focused on the task at hand.

Cichosz closed out the regular season with a win at the Box Elder/Rocky Boy Invitational and a runner up finish at the prestigious Glacier Invite which featured many of the top Class A, B and C runners in the state.

All his time and improvement throughout the season payed off in the end with a successful trip to Great Falls for the State B Cross Country Meet.

Cichosz came to the starting line at the State B ready to run a cold, snow covered course, "I had it all on, Under Armour, compression leggings, long sleeve shirt and pink gloves. The gloves were nice they were all I had and coach (Doney) gave them to us all to wear for Breast Cancer Awareness," said Cichosz.

While lined up at the starting line Cichosz said he had one thing on his mind, "Let's get this done, let's just get it over with and don't lose!"

As he came down the final stretch, lined by hundreds of fans cheering the runners on plenty was going through Cichosz mind, "I thought the second guy was right behind me and I was starting to get scared but then I crossed the finish line and I was so relieved, it was a big weight lifted off of me," said Cichosz.

Cichosz credits his coach and those around him for helping him get the job done, "Coach (Doney) prepared me, she pushed me hard, believed in me. For two years she told me I could do it. I have so many friends and family that have always been their, supporting me, helping me achieve all that I have. I couldn't have done any of it without their support.

As for the track season this spring, "It feels good to have this win, now its time to go for more when track season comes around. Cichosz concluded.

Lawrense as been a standout runner for the Harlem girls all four years of high school and turned in another solid effort in her final high school cross country race. Lawrence completed the course in 19:47.04. 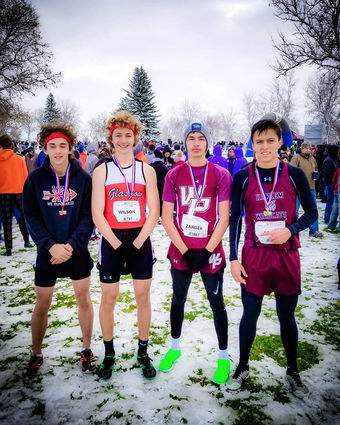 Sophomore Taya Trottier had a solid run of her own for the Wildcats. Trottier just missed out on earning All-State recognition, finishing a very impressive 17th in the large field. Trottier finished the race in 21:09.89. Freshman Amillia Blackcrow also represented Harlem at the State B, turning a very respectable 23:15.38 to earn a 51st place finish.

Sophomore Daniel Lawrence was the second Wildcat runner to finish, clocking in at 18:43.18 to finish 29th. Sophomore Teagan LeValdo was 56th with an effort of 19:42.94. Senior Truth Brockie finished in 99th position with a time of 20:40.88.