"Major eco-threat may be coming from the north" 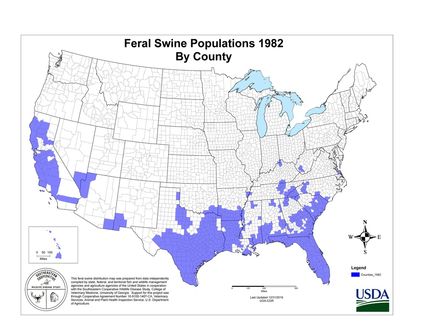 These two maps show the spread of feral pigs in the U.S. over a 36- year period. The destructive wild pigs, moving south from the prairie provinces of Canada, pose a potential threat to agriculture and wildlife in Montana. Montana's Department of Livestock is charged with eradicating the feral pigs, described as "one of the world's most invasive species."

Columnist's note: A few weeks ago a neighbor asked me to attend a meeting in Sweet Grass about feral swine. The invasive critters are also called feral pigs, wild hogs, razorbacks, Eurasian boars and a lot of expletives by farmers, ranchers, hunters and others. Any pig not penned or under human control is generally regarded as feral.

The meeting was attended by 60-70 folks mostly from the U.S. They gathered to hear regional and national experts explain the challenges of dealing with feral pigs which now number six million in 35 U.S. states. The prairie provinces in Canada all have major fer...