Chinook wins 6C-East District Tournament, earns No. 1 seed at Northern C Divisional Harlem Lady Cats finish 2nd at District 2B, will be No. 2 seed at the Northern B Divisional in Wolf Point on Thursday 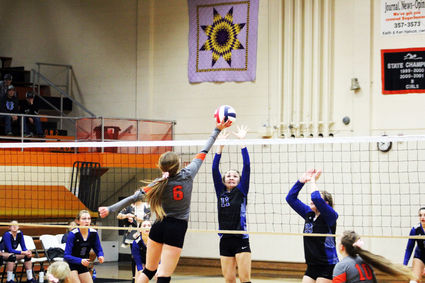 Chinook junior Delaney Kellam places the ball perfectly for a point in the first semi-final against the North Star Knights Thursday.

The Chinook Sugarbeeters captured another District 6C-East Championship and the Harlem Lady Cats turned in the best showing in school history with a second place finish at the District 2B Tournament in Glasgow.

The Sugarbeeters cruised through the tournament in Chinook, which began on Thursday and concluded Friday. They opened with a 3-0 sweep of the Big Sandy Pioneers and then beat the runner up North Star Knights, both Thursday and Friday, evening to win their second straight championship.

Harlem began play in Glasgow Friday afternoon with a 3-0 sweep of the Wolf Point Wolves. Friday nigh...