Ken Finley loves to share the spirit of Halloween 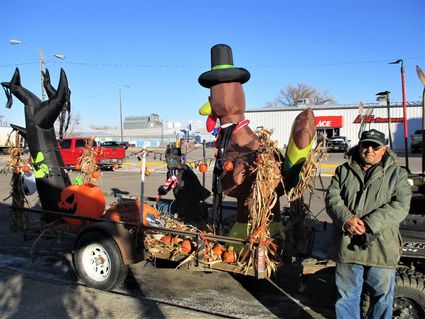 Ken Finley, of Chinook, poses with his Halloween Parade-a utility trailer decorated with homegrown produce, yard blowup ornaments and lights. The lights and blowups are powered with a gas generator in the bed of Ken's side-by-side. Finley, known for his annual giveaway of pumpkins for Halloween, started the parade idea four years ago. He said he always wanted to be in a parade and win first prize for his float.

Many locals know Ken Finley as "the guy who gives away pumpkins for Halloween from his garden." For the last few years Finley has invited anyone, especially elementary school students and their families, to come out to his pumpkin patch and pick a pumpkin for Halloween. The pumpkin patch is part of a large garden Ken has each year along Cleveland Road next to the Chinook Water Plant. He said this year he even had a volleyball team from Hays-Lodgepole that stopped and picked pumpkins on their way home after playing in a tournament.

Just a few days before Halloween Ken greeted others and me at the Chinook Post Office. He pointed out the window to a utility trailer hooked to his two-by-two and said, "I'm taking my Halloween Parade around for people to see." The trailer was decorated with pumpkins, gourds, several large blowup lawn ornaments and a lighted 100+ pound, carved Atlantic Giant (a monster-variety of pumpkins that Ken enjoys raising and showcasing). A gas generator in the bed of the two-by-two powered the lights on the float and the fans for the blowups.

Ken shared some history of his parade idea. He explained, "The first couple of years I just put some decorations in the bed of my two-by-two and drove around town. Last year I added the utility trailer so I could have more decorations and lights. This year I added the generator so I could power even more lights and the blowup figures." It's a festive grouping of home grown produce from his garden and holiday-themed characters. There's a large Thanksgiving turkey added for good measure.

Asked what prompted the idea for a holiday float, Ken explained. "I've always liked parades and wanted to win first place with a float. I created my own parade and gave myself first place for the float." One of the postal employees added, "and now you're also the parade marshal." Ken thought a moment and added, "That's right!"

Ken said, "To really enjoy the lights you need to see them in the dark. A few nights before Halloween I take the float down to the 900 block of Indiana Street so folks can drive by and enjoy the lights." Ken is a guy who definitely enjoys sharing the spirit of Halloween.