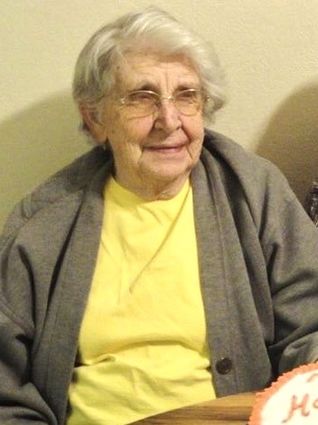 With a gentle tug, God reunited Stella with her son, Bruce in heaven on the evening of November 15th.

Stella Rice was born July 20, 1926 in Big Sandy, MT to Carrie and Walter Rice; she was the middle child of nine siblings. After graduation from high school, she went to work for the Great Northern Railroad as a telegraph operator. She met George H. Lamb while working at the depot and they were married two months later. World War II was going on and George was called to serve his country. Upon discharge, they moved to a small farm north of Saco on the Milk River where they lived for 60 plus years and raised their three children, Ric, Sue, and Bruce. Stella worked at the Saco Public Schools as head cook for 31 years. She was very active in the Saco Assembly of God Church. In 2012, Stella and George moved to Malta to be closer to their business, R & G Quality Feeds, which they own along with their son, Ric.

Stella was a true homemaker with many talents of sewing, baking, cooking, canning, and taking care of the farm, hand in hand with George. Stella was known for her consistently successful garden, ability to always fight off the mosquitos, her fierce board games skills which she passed on to her grandchildren, and always having homemade cinnamon rolls and chocolate chips cookies awaiting when company arrived. She would never turn down a sweet treat or a handful of chocolate chips and was always up for working on a puzzle.

The last few years of Stella's life were filled with some health challenges but during that time her and George's love never waivered. They always tried to be side by side even in sickness. They would have celebrated 75 years of marriage on this coming January 15. Stella will be missed for all that she was and all the great memories and life lessons she passed onto her children, grandchildren, and great grandchildren.

Stella is survived by her husband, George Lamb of 74 years, son Ric (Cori) of Malta, daughter Sue McQuillan of Joliet, daughter-in-law Cindy Lamb of Havre, brother George Rice (Helen) of Big Sandy, grandsons; Travis Lamb (Lizette) of Hinsdale, Jason Lamb (Janelle) of Sidney, Justin Lamb (Gina) of Malta, Landon Lamb (Janina) of Townsend, Kelly Lamb of Missoula, Tyler Lamb of Bozeman, Seth Prestwich of Seattle, Josh McQuillan (Amber) of Joliet, Cole McQuillan (Jolene) of Joliet, and granddaughters; Katie Croft (Jon) of Joliet, and Morgan McQuillan of Joliet. Stella is also survived by 28 great grandchildren and multiple nieces and nephews. She is proceeded in death by seven of her siblings, parents, son Bruce Lamb, and grandson Dusty Prestwich. While we are all missing our wife, mom, grandma, great grandma, we know that at 93 years young she was ready to join the angels and be in complete peace.

Services will be held at Kirkwood Funeral Home in Malta on Saturday, November 23rd at 11 a.m. followed by a luncheon at the Assembly of God Church in Malta. We will gather at the Saco Cemetery at 1:30 p.m. for graveside burials. In honor of Stella, the family requests that everyone wear bright colors. Memorials may be made to the Hi-Line Retirement Center in Malta. Condolences for the family may be left at http://www.kirkwoodfuneralhome.com.