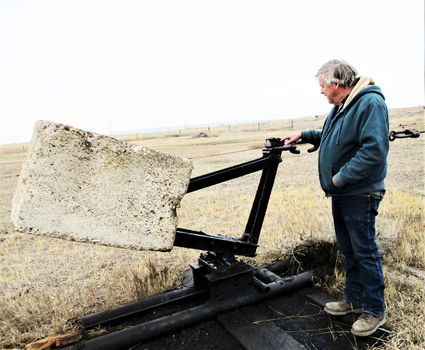 Rick Rice, owner and operator of Phoenix Energy in Oilmont, points to a wooden bushing on the arm of the 'dummy,' a 3000 pound block of concrete. The dummy is used to balance his rod line system that powers three oil well pumps from a single power source. Technically called iron rod jerk lines, the systems came to the Oilmont area, north of Shelby, in the 1920's and were widely used in the Kevin-Sunburst Oil Field. Rice owns three operable rod line powered fields, some of the few still standing.

Columnist's note: Travelers in north central Montana are used to seeing pumpjacks (oil wells) dotting the region. Around Oilmont on the way from Whitlash to the I-15 access north of Shelby (on S-343) we pass a sizeable area of small, older-looking oil wells. Some are pumping, others seem to be idle. There's also a lot of abandoned buildings and equipment that were used to produce oil and gas.

East of the town of Oilmont, about two and a half miles on the north side of the highway, there's a couple of metal buildings and some oil tanks. The smaller building has an above ground rod running o...