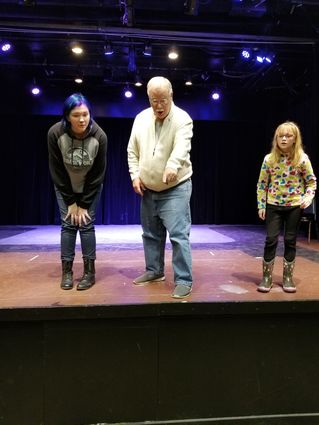 During rehearsals on Monday, November 18, Tehya Vauthier playing Madison, the giant's daughter; Ben Hall performing the character Doctor Humberdunk, Mayor Sullymange's assistant; and Tyley Hemmer acting as Rainn, the giant's magic harp, gaze and point from atop the Beanstalk as they look down on the village of Cowrumpford.

Continuing their Christmas tradition established over the past several years, Montana Actors' Theater (MAT) will be presenting, Jack and the Beanstalk, the classic tale of magic beans, a giant, and treasure this holiday season. The show, which will open on December 6 at 7:00 p.m., will be performed as a panto at the MAT on MSU-Northern's campus on Cowan Drive. And it will feature Chinook resident Ben Hall, who will be playing the elderly Doctor Humberdunk. The play will run through December 21.

Although one might suspect that a panto is a pantomime with silent characters, it is neither a...