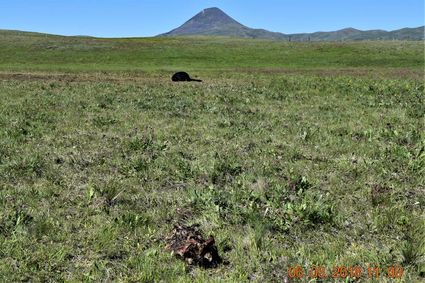 This photo was taken just a couple of hours after the carcass was first discovered at 3U Cattle Company south of Whitlash. Rancher Bob Thompson said, "I initially thought the carcass was one of my calves. It turned out to be a yearling, but not one of ours. The rear half of the animal was missing, cut away with a very precise cut. The tongue and lungs were also gone along with the rear half." In the foreground is a pelvic bone and some vertebrae, found about 90 feet from the carcass and still sticky. No other missing animal parts were found. To the west is Gold Butte.

Columnist's note: I'd heard of cattle mutilations but when we moved to the Sweet Grass Hills (about this time a year ago) I began to learn about the specifics of these mysterious happenings. Bob Thompson and his family operate the 3U Cattle Ranch south of Whitlash. As we got to know the family our conversations turned to a cattle mutilation on their ranch in the summer of 2018. They had photos to document the carcass of a yearling left in one of their pastures. The photos were, well, weird and a bit unnerving.

In the meantime I dug out and read a book about mutilations in our region given t...