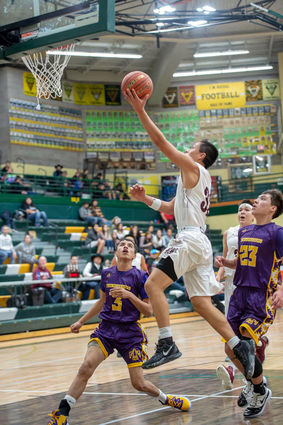 Harlem senior Brad Cichosz glides in for two points in the Wildcats 67-58 win over the Hays/Lodge Pole Thunderbirds Saturday night at the Native American Classic in Great Falls.

Three of the four Blaine County boys basketball teams were in action this past weekend as the Harlem Wildcats, Hays/Lodge Pole Thunderbirds and Turner Tornadoes kicked off their 2019-20 seasons over the weekend. The Chinook Sugarbeeters will have to wait until this weekend to begin their season at the Shelby preseason tournament.

The Wildcats and Thunderbirds were in Great Falls taking part in the Native American Classic being played on the campus of CMR High School. The Tornadoes were in Glasgow at the 5th Annual Class C Showcase.

The Harlem Wildcats paid some serious dues a season ago. Th...