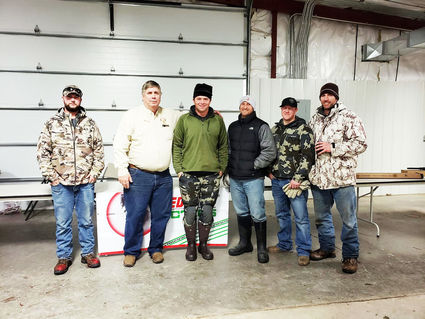 Despite the colder temperatures and weekend snowfall, the First Annual Chinook Volunteer Fire Department (CVFD) Coyote Hunt held December 6-8 saw 21 teams registered and out hunting. By Sunday night when all the counts were finalized, weights confirmed, and fur settled, top winners were declared.

Open Class had no payouts as no coyotes were brought in by any Open Class team.

In other awards, weighing 37.7 pounds, the biggest coyote was bagged by Eli Hinebauch. For winning Biggest Coyote, Hinebauch won a Thompson center 223.

Winning Smallest Coyote honors was Kevin Velk for his 13.6 pound animal. To honor his notoriety, Velk was awarded a 12 gauge shotgun.

By the end of the day on Saturday, in the Calling Class, which fielded sixteen teams, Merle Young's team #816382 had eleven coyotes for a total weight of 294.4 pounds, and one porcupine. Running in a close second, Dan Skoyen's team #816437 had ten coyotes recording a combined weight of 258.5 pounds and 18 jackrabbits.

The five teams in the open class had no coyotes to count but turned in five porcupines and eleven jackrabbits.

Sunday hunting added to those totals, and winners were announced Sunday night, December 8, during the event's Awards Ceremony. Final check-in at 5:00 p.m. at the Blaine County Fairground's Commercial Building was followed by a pulled pork nachos free-will donation dinner.

Winner of the AR-15 gun raffle was Bob McBride of the Corvallis Volunteer Fire Department. As part of his prize, McBride will be able to choose a custom hydro-dip or custom laser engraving on his AR-15.

Hydro dipping is known by several other names: immersion printing, water transfer printing, hydrographics, camo dipping, and hydro imaging. It is a unique process that allows an artist to apply graphics by transferring an image or pattern to almost any three-dimensional object or surface. A creative way to paint metal, hydro dipping never produces the same pattern.

One event organizer stated: "We would like to thank Bob and his team for coming all the way from Corvallis to participate in our 1st Annual CVFD Coyote Hunt. We hope to see them back next year." 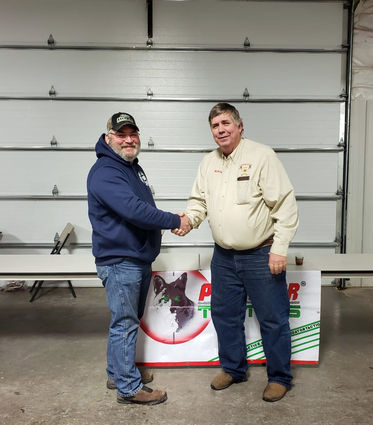 Winner of the AR15 Gun Raffle was Bob Mcbride of Corvallis.

In addition, a generous donation of night vision optics, event organizers were able to award a second place winner in the gun raffle. Winner of the Coyote Reaper XXL Infrared Illuminator was Elaine Blasdel of Kalispell, Montana. With up to 700 yards of beam throw, adjustable focus, and intensity control, this predator hunting light enables a hunter to identify critters at a half mile and beyond, making it an essential tool in the hunter's arsenal for nighttime predator hunting.

Because of the generosity of area businesses, door prizes were drawn throughout the evening. These prizes included electronic game calls, booster cables, ear plugs, and various gun tools and hunting gadgets.

A spokesperson for the CVFD Coyote Hunt reported: "What an awesome weekend we had! We want to thank everyone again for all the support of the Chinook Volunteer Fire Department. We raised just over $6,000 for our local department. None of this would have been possible without all the sponsorships, donations, and participants. Thanks again, and we will see you next year for the 2nd Annual CVFD Coyote Hunt."