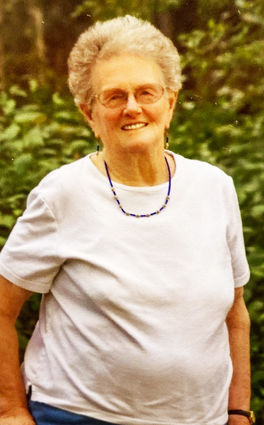 Cremation has taken place and Wilderness Funeral Home has been entrusted with arrangements. Shirley's funeral service will be held at 11:00 a.m., Saturday, December 14, 2019 at the American Lutheran Church in Chinook MT where memorials in her name may also be made.

Shirley May Keech was born in a log and sod house in Glade Valley, South Dakota on December 25, 1931 to Clifford and Bina Keech. They always said that Shirley was their little Christmas gift.

Shirley's early years were spent in South Dakota, Idaho, and Washington. She attended elementary and high school in Seattle. During high school, Shirley began working at the local theater and made many lasting friendships. It was also during this time that she met Jim Williams. She and Jim dated through high school and during his time in the Air Force. Jim and Shirley were married June 28, 1952 and she moved with him to the family farm north of Chinook after his father's passing. Shirley was a self-proclaimed tomboy and loved farm life although she was very lonely. They began their family right away and had Jay, Dale, and Cindy all within 3 years. A few years later they had Durwin, their family was complete, and Shirley didn't have any time to be lonely.

Then, on April 4, 1968, Jim was killed in an accident in the shop. Shirley, along with Jay and Dale, did what they could to keep the farm running. Shirley also became a nurse's assistant at the Sweet Nursing Home. Sadly, tragedy struck again, May 13, 1971, when her oldest son, Jay, was killed in a vehicle accident. Times were tough and Shirley made the difficult decision to lease the farm and move to town.

Being in town allowed Shirley to become more involved with the church and various clubs in town. She also met Harold Komis, her second chance at love, and they were married December 1, 1972.

She and Harold frequently went camping and enjoyed traveling to visit family and friends. When Harold passed away in 1989, her kids convinced her to get a small RV so she could join them on camping trips and could go out on her own if she wanted.

Shirley enjoyed baking. She made fresh baked bread, gooey cinnamon rolls, and the best apple pie you've ever had. She was very involved with her church, was a 4H leader, a member of the Chinook Jaycees, a volunteer at Sweet Nursing Home, the Lohman Loyalite Club, the Garden Club, the North Yantic Club and many other local organizations. She walked every morning until she was no longer physically able and would inevitably end up at the Senior Center to have coffee. She loved her children, grandchildren, her church, and her community.

Shirley is preceded in death by her brothers, Sherman and Ray, her sister, Mary, her parents, Bina and Clifford Keech, her husband, Jim Williams, her son, Jay Williams, and her husband, Harold Komis.