Blaine County Beacon: Taking Inspired Action with a Side Hustle 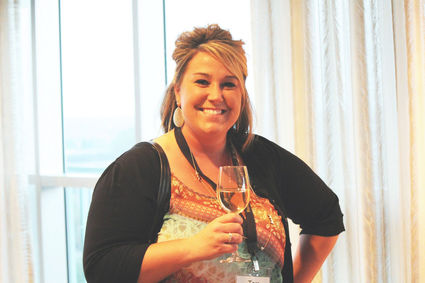 Tara Hofeldt is an Independent Wine Consultant, as well as the Managing Director and Montana's Executive Recruiter for WineShop At Home.

An Independent Wine Consultant, as well as the Managing Director and Montana's Executive Recruiter for WineShop At Home, Tara Hofeldt speaks with enthusiasm and conviction when she talks about her ventures as a businesswoman:

"Long ago, The Sage Grape was originally going to be a store front in town that I was going to open when the old Circle K building was for sale. However, the liquor licensing in Chinook at the time was a bit of a battle and very expensive, and when WineShop offered their services in Montana, I decided to go that route. But, I kept The Sage Grape name as it does have a Tax ID number. With that, I can offer more things than just the WineShop At Home labels," she reminisced.

Getting to this point of fond reminiscence, though, has been a colorful journey. Hofeldt finished her Business Management/Business Technology Degree with a minor in Accounting at MSU-Northern in May 2014. She initially began college in 2004 as Tara Townsend, but took a few years off in 2006 to get married, have children, and work in the insurance industry. She married Levi Hofeldt in October 2006, and their two sons, Ryder and Rhett, followed in 2009 and 2011, respectively.

In 2012, when Rhett was just a year old, her employer at the time, Kasie McIntosh of Solem & McIntosh CPAs encouraged her to return to school and earn her degree.

"Kasie, and all the staff, allowed me so much flexibility and encouragement to finish my degree that it was mostly a personal accomplishment. Looking back, now I know it was the right choice. With cattle markets dropping and the world being what it is, remaining self-employed in the agriculture market is a bit scary. With a degree, I always have the background to be employed in many places, if and when I need to be."

Initially, Hofeldt wasn't sure what she would do with her degree. "Being married into a farming/ranching family, I knew I wasn't out to start a 'career' in business, but I knew there were many jobs in Chinook which could be obtained by holding that degree," she said.

Although Hofeldt was living in what she describes as a comfortable, safe zone of "okay," she wasn't entirely content with the lifestyle she had created. "I was fresh from having babie ... premature ones, unhealthy little dudes who needed their mama, and I was torn as to what to do next. I was comfortable, but not thriving."

Hofeldt wanted to be able to afford to stay home with her two sons as much as possible, but she was skeptical about taking a risk and losing the financial security she had.

"I was working my insurance job and also doing direct sales with Scentsy parties, but I knew I was being called to more. So, in December 2013, when a WineShop At Home consultant found me in Montana, I took inspired action and followed my intuition. I knew if I wanted this business to become something that would actually change my life and that of my family, I would have to sell and recruit."

WineShop opened in Montana on December 12 when the state was licensed for in-home wine sales in 2013, and Hofeldt joined the company on December 17. There was only one problem. Hofeldt had no idea what she was doing. "I lacked a lot of skills and a lot of confidence. In fact, I was terrified and asked myself: Could I become someone other people wanted to join? Wanted to follow? Wanted to succeed with? All I knew was that something had pulled me towards this bigger step and bigger version of my life and that I couldn't succeed alone. So, I got to work on the skills I did have and began working my business."

To her venture, Hofeldt brought not only her drive and determination but her love for meeting new people, socializing, entertaining, and party-planning. However, she hung on to the "guaranteed pay check" with her insurance job.

Whether she knew it originally or not, Hofeldt was destined for business. In 2003, as part of a high school work release program, she began working for Kasie McIntosh, who is a CPA and current owner of Solem & McIntosh CPAs in Chinook.

"Kasie provided me a job after I graduated from high school and was very accommodating with my college schedule. I worked for her until 2007 when I went to work full-time for Mike Inman at Hub International Insurance. I worked there until I had Rhett in 2011. Rhett was premature and had many complications, so with Ryder being only 16 months, and Rhett as a tiny newborn, I left my job with Hub International to stay home. However, in April, I reached out to Kasie because I was going stir crazy at home, and she offered me a job back in her office with accounting."

Hofeldt has been working with McIntosh off and on for sixteen years, an employer who has been, in Hofeldt's words, "a huge supporter who understands mom-ing schedules."

WineShop provides a side job that keeps Hofeldt socially engaged and generates additional income while complementing her insurance job and parenting schedules. She hit her first four-figure paycheck in her first month with WineShop, and those checks have only escalated, she claims.

Now, six years in, Hofeldt loves her sideline position. "Today, my WineShop business is thriving and has changed my life personally and financially. I'm able to support my family while having flexibility. I've also strengthened myself into a high earning leader and businesswoman. But my greatest accomplishment is building a wonderful group of empowered men and women who are creating side hustles and asking more of themselves because they were ready to take inspired action!"

Forever playing the recruiter's role, she added: "If you think that you would like to make your own hours, set your own business goals, or work from home, then you will love the opportunity available with WineShop."

According to Hofeldt, interested individuals would be joining a team of passionate wine enthusiasts throughout the country. Currently, there are fewer than 3,500 active wine consultants, making the opportunity more attractive and potentially lucrative.

"There's no inventory to stock with this business, and you get to professionalize your wine consumption by drinking the best handcrafted wine the world has to offer. Plus, you'd be joining hundreds of other men and women who will accept you, train you, and want you to succeed," Hofeldt said.

She added: "Sure, there are challenges living in a small community, but that challenge demands creativity. So, I ask myself: 'What can I offer that others can't?' I think it's all in how you want to promote the product. I especially enjoy doing pours and pairings that enable me to teach people about how wine can prepare the palate or complement a meal.''

For her side hustle with WineShop At Home, Hofeldt maintains a website (https://www.wineshopathome.com/?rep=thofeldt) where the visitor will find recipes, wine pairing suggestions, and inspirational ideas for wine tastings, gifting, and parties. Visitors can also take a quiz to find their personal vinotypes, as well as learn about Wine Club, In-Home Wine Tastings, and Specialty Pouring Events.

In addition to her WineShop business, helping her husband, Levi, with the ranch, and running a household with two boys-Ryder, who is now ten and a fifth grader, and Rhett, who is now eight and a third grader-Hofeldt loyally works Monday through Thursday at Solem & McIntosh CPAs.

When asked what advice she might share with others, she said: "When an opportunity arises, trust your intuition and just go for it!"