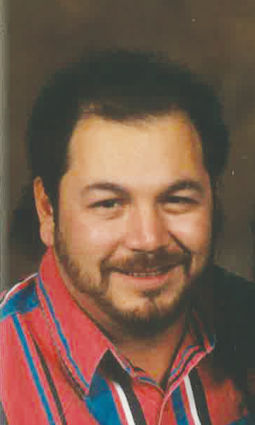 Richard Allen {Rick) Johnson died Sunday Sept.22 2019 in Harlem Mt. Rick was born March 31, 1959 and spent the first months of his life in the orphanage in Helena Mt. that operated at the time. At the age of 17 months Rick was adopted by Neil and Maxine (Conrad) Johnson. Rick was a long-awaited addition to the childless couple and was soon joined by a sister Rhonda and brother Nick. Rick was an active little boy and loved climbing and exploring. He was discovered on the roof of the little house they lived in after climbing out of the bedroom window while everyone else slept. Rick continued his active life climbing in the trees of " Johnson Jungle" the home the couple built down the street. When Rick was 13 a little sister named Jennifer was born and was a special gift to the whole family.

Rick participated in lots of activities while growing up in Harlem. He was in the Boy Scouts, band, baseball, Football and track to mention just a few. The Johnson family loved to Camp, so Rick was very experienced in that area. Rick was a hunter, fisherman and all-around lover of the outdoor life.

Rick attended the Police Academy in Bozeman and became a police officer in Malta, Noxon and Harlem. Rick had a lot of different jobs in his life but decided he wanted to travel. He became a Truck Driver and drove up and down the NW coast. Rick loved that area and wanted to move there to live, unfortunately he hurt his back while driving and didn't fulfill that dream. He stayed in Harlem, but continued to be as active as he could be ... Still fishing and loving life and sharing those experiences with anyone who also wanted to come along. Rick was easy to talk to and would always have a smile and a laugh for anyone he came across which made it easy for him to make many, many friends.

Rick was married a couple of times and had many special women in his life, but decided marriage wasn't for him. He did desire to have children and was blessed when Kaydence Blackwolf came into his life and called him daddy. Rick was also adopted by Georgette Shawl when she was 16 and they enjoyed many years in each other's lives.

Rick was a wonderful father and an awesome Uncle. He had several nieces and nephews who he kept tabs on at all times. He was always asking what the kids were up to and how they were doing. John LaSarte, Erica Johnson, Echo Johnson, Nikki {Evan) Azure, Devone LaSarte, Amanda {John) Miller, Brenda Brewer and Cody Brewer all called him Uncle Rick.

Rick was preceded in Death by his parents Neil and Maxine Johnson, a sister Sheila who died at birth and his sister Jennifer.

Rick is survived by his sister Rhonda (Jim) Brewer of Zurich, brother Nick (Darla) Johnson of Dodson and all the preceding nephews and nieces. He is also survived by a large extended family which included a half-sister Deanne of WA which he was very close to and her children.

Ricks Wake and Rosary were held Wed. Sept 25th and his funeral was Thursday Sept. 26th at the Fort Belknap Community center. Burial is in the Matte Family Cemetery.

Wilderness Family Funeral Home was in charge of preparations.