Dr. David Madsen, Swine Outreach Coordinator for the Montana Board of Livestock, worked with Blaine County 4-H and FFA members, sharing his extensive experience and knowledge of pigs.

Dr. Madsen is a Nebraska native who grew up on a diverse livestock and grain farm in Indiana. He graduated from Purdue University in 1969 and entered general veterinary practice with a food animal emphasis, retaining this focus until 1994.

Retired in 2014, Madsen currently lives in Dillon, Montana, where he serves as Swine Outreach Coordinator for the Montana Board of Livestock, working with 4-H and FFA groups across the state to ensure the safe health and housing of Montana's pigs. He also works as a part-time general practitioner in a mixed practice and provides surgical services for the local animal shelter.

Madsen has a broad knowledge of hogs, having served as an American Veterinary Medical Association (AVMA) delegate from the American Association of Swine Veterinarians (AASV). At the AASV Annual Meeting, held March 9-12, 2019 in Orlando, Florida, Madsen was presented with that organization's Meritorious Service Award.

The award honors outstanding service to the AASV, and Dr. Madsen was a charter member of the organization in 1969 when it was the American Association of Swine Practitioners. He represented the AASV for twelve years in the AVMA House of Delegates, represented food animal veterinarians on an AVMA committee that drafted principles of animal welfare, and served on the AASV Foundation board, through which he proposed developing a free pre-conference seminar for students and recent graduates. The AASV Foundation Board adopted as its motto, Madsen's proposed phrase, "Ensure Our Future: Leave a Legacy."

With his extensive experience and knowledge of pigs, Madsen covered information at Saturday's workshop that included setting goals for projects and selecting quality animals, as well as feeding, housing, handling, and caring for those animals. Madsen's presentation, which was attended by several Market Swine Project 4-H and FFA members and some parents, further shared a variety of other topics related to the swine project, such as health and hog well-being. 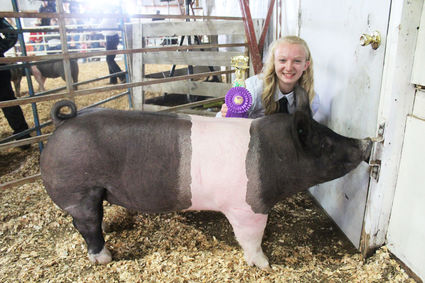 Snedigar went on to explain: "We ran this workshop much like the beef workshop which was held over Christmas break. We are focusing on offering these project workshops to our 4-H members this year as a way to help them gain the knowledge and skills they will use not only in their projects but also later in their lives. One of the main purposes of 4-H is to learn by doing. So, these workshops provide a way for members to experience real world agriculture, sending the message that they're not just taking an animal to the fair."

Next up in the workshop series, the Extension Service will be hosting a workshop for breeding and market sheep participants. Twelve youth are currently signed up to take a market lamb to the fair this year, Snedigar reported, and two are enrolled in sheep breeding projects.